When I travel, I rarely bring back souvenirs, but I've noticed that, on the rare occasions when I do return with a memento of a trip, it becomes a special way of remembering the experience.

In the early summer of 1974, E. and I visited Portugal and Spain. It was a momentous time in Portugal. Shortly before our arrival, the government of Portugal's longtime dictator, António de Oliveira Salazar, had been overthrown by a military coup. Although the coup was bloodless, there were concerns about instability in its wake. As a result, virtually all tourists cancelled their trips. Except us.

We arrived in a Lisbon blissfully free of visitors and awash in the euphoria of freedom. Bookstores displayed Marxist texts and other books that had been banned for decades. People couldn't stop smiling. We regarded ourselves as witnesses to history.

From there we traveled to Spain, where Francisco Franco still held power. The contrast was dramatic. Madrid felt subdued. People went unsmiling about their tasks. In comparison to the elation of Portugal, Spain seemed in a state of suspended animation, waiting for its moment of liberation.

During our stay in Madrid, I purchased one item, a small ceramic flask with a geometric design in black and orange against a pale coral background. Today, so many years later, that small piece of pottery reminds me of our fascinating sojourn in two countries on the cusp of enormous change. 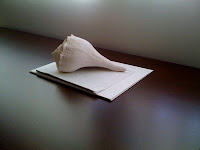 More recently, E. and I took a boat trip through the Ten Thousand Islands, where the Florida Everglades meet the Gulf of Mexico. During our sun-splashed day, we stopped at a tiny island. On the sand, we found hundreds of beautiful shells. It was tempting to gather up as many as I could carry, but when E. discovered a perfect conch shell, that seemed enough. Today, that shell sits on my desk. I use it as a paperweight, but it also holds my memories of sun, sand, and surf.

Considering how much the few mementos I've gathered mean to me, you'd think I'd make a point of collecting souvenirs. Maybe next time. For now, I'll treasure those few I have.
Posted by Barbara at 6:06 PM