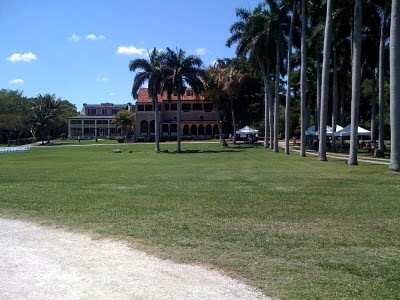 In 1916 Charles Deering, the CEO of International Harvester, purchased a 444-acre estate in Palmetto Bay, south of Miami. The property featured an existing wooden house, which had served as a hotel when the area was known as Cutler. In 1922, Deering built the Stone House, adjacent to the wooden house. What brings people to the estate, though, is not so much the houses but the amazing grounds.


The house overlooks a beautiful palm-lined boat basin. When I was there, no fewer than four manatees were basking in the warm waters of the protected marina. If you click on the picture above to enlarge it, you may spot the head of one manatee, photographed just as it came up for air.


The property also boasts the largest virgin coastal tropical hardwood hammock in the United States, a mangrove forest accessible by a boardwalk trail.


Before the white man arrived, Indians flourished here for millennia. A Tequesta Indian burial mound on the estate grounds has provided important archeological finds. While most traces of Indian habitation have disappeared, the mangroves have endured and still take root in the salt water of Biscayne Bay.
Posted by Barbara at 6:05 PM