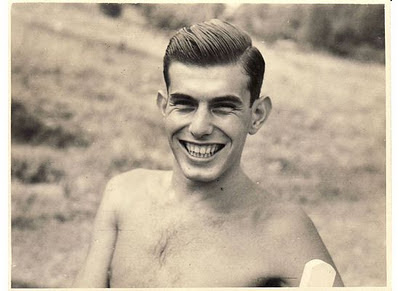 Here is a young man, perhaps nineteen or twenty years old. He appears happy, in fact bursting with joy, his smile from ear to ear. He adopts a relaxed pose, bare-chested, his arm flung over the back of his chair, his hair slicked back, as if just combed after a swim.

The photo is ageless yet dated. Its sepia tint hints at a time long past, but given the young man's contemporary hairstyle and the lack of any other visual clues, it could have been taken yesterday. From the blurred background, the setting appears rural. The season is surely summer. Everything about the photograph suggests that the young man leads a carefree, even indolent life. His shoulders don't look as if they've carried heavy loads. With his broad smile and straight white teeth, it's easy to imagine a life unmarred by tragedy.

The man in the photo is my father. The time is around 1939 or 1940 and the place is Merryall Farm in New Milford, Connecticut. The scene is indeed one of prosperity. The gentleman's farm was owned by my father's Aunt Fannie and her son, Paul. My father spent many happy weekends at the farm and loved to swim in the little pond located on the property. But his smile belies the burden he carried—at the time the photograph was taken, his family was trapped in Nazi Germany.

My father arrived in New York City in 1936, at the age of 16. My grandmother, fearing the worst, had been desperate to send him to safety. His Aunt Fannie had sponsored him, so he was able to flee his home in Karlsruhe and travel to the U.S.  His sister, Margot, only twelve years old at the time, had to stay behind with my grandparents. Only in 1939 did they at last manage to secure transport to England for her, on the last Kindertransport to leave Germany.

At the time this photo was taken, my aunt may still have been in Germany and my grandparents almost certainly were, though perhaps they had already been interned in Gurs, a French concentration camp. In 1941, miraculously, they were able to obtain passports and leave the camp. After an arduous journey, they joined my father in New York only two months before Pearl Harbor. My aunt arrived from England at about the same time.

My father enlisted in the Army. He served in Army intelligence and received a field commission from General Eisenhower, earning him the rank of Second Lieutenant.

The photograph captures my father's optimism and his resilience. It even offers a clue about his orderly nature in his neatly combed hair. But there's mystery in his disarming smile. The very openness of it is at odds with the reserved father I knew. And certainly his smile is at odds with the dark clouds hovering over him and the whole world at the time the picture was taken.