I had a dream the other night that President Obama asked me to marry him. He actually got down on one knee in the middle of a big event and proposed. I disregarded the fact that we were both already married and said yes, believing in my dream state that even the things I don't like about Barack Obama would instantly be transformed by my acceptance into love.

Would that real life were so easy. When it comes to political issues, I wish I could be in perfect accord with all my friends, but that congenial state eludes me. Life would be pretty dull if we all agreed about everything, I suppose, yet I still yearn for harmony. Inevitably, though, no matter how hard I try, I just can't stop being me.

For example, if a friend invites me to see a film with her, I love the idea of sharing the experience and discussing it afterward. In my fantasy, we always feel the same way about the movie. In reality, of course, sometimes I don't like it even though she does. I want to like it. I want to share her taste in every detail. But sometimes I simply don't.

Worse still, trying so hard to achieve harmony can induce its opposite. The pressure of being agreeable builds up and suddenly an unbidden explosion occurs—I hate Woody Allen, I might declare, when really I'm just not a big fan of his recent films. For the record, I didn't love Midnight in Paris, but I didn't hate it, either. There, I've said it. Those of you who loved it, don't hate me, please.

If I, like Obama, were a President running for re-election, I'd be tempted to say what I thought people wanted to hear. But ultimately the truth would out. I would proclaim my true beliefs and then worry that I'd alienated the voters. Fortunately, I'm not running. And I'm definitely not a First Lady, except in my dreams.

A Whale of a Great Rescue

My sister, Nina, knows how much I love animals. She's quite an animal lover herself, having given a home to assorted pets over the years, including lovebirds and a chinchilla. This morning she sent me a link to a YouTube video called Saving Valentina. You've got to watch this video. Just click on the title and, if you can, expand the video to full screen on your computer.

When members of the Great Whale Conservancy came across a young humpback whale entangled in a fishing net, thankfully they had a video camera on board their small craft and the desire to document their rescue attempt. The resulting video captures one of those rare encounters between man and the giant mammal which truly suggests that understanding can transcend species boundaries even in the absence of a common language.

It's always tempting to anthropomorphize, but when you watch the video, you may find yourself agreeing with me that the distressed whale seems to understand quickly that the people are trying to help her. And by the time you reach the thrilling end of the video, you may share my impression that the whale is showing her joy at being rescued and thanking her rescuers for saving her life.

My speculations even extend a bit further. I wonder whether that young whale later told other whales about her rescue. We know humpbacks are highly intelligent. A few months ago, I came across a video of their amazing synchronized hunting technique (click on the link to see it).

Humpback whales may not have vocal chords, but they do produce varied and complex "songs" which act as a kind of language. Scientists have studied humpback whale songs and concluded that they use hierarchical structure in their language, the only other creatures known to do that besides humans. Male humpback whales produce songs that last anywhere from six to thirty minutes. A lot could be said in that amount of time! A link to what humpback whale song sounds like is here.

While females are capable of making sounds, only the males produce highly structured songs filled with distinctive melodies and themes. So, if Valentina really is a female, as her name implies, she may not have said much of anything when she encountered other whales. Still, it's tempting to imagine that she told them people can sometimes be trusted.

Whales, as well as their dolphin cousins, are known to approach boats and swim alongside them. They must have figured out that not all human beings are hunting them. At least, I like to think so. I feel enriched by  viewing a video like the one about Valentina. So, Nina, please keep them coming. And all other uplifting animal stories and videos are welcome!

Photograph courtesy of Wikimedia Commons. Click on the photo to enlarge it.

Taking Up a Collection

It's not what you may think. I'm not asking for money or for old clothes, but I could use a few good ideas. I've noticed that many people seem to enjoy collecting things, so I'd like to take up collecting, too.

My mother-in-law, Reggie, was an enthusiastic collector of frogs. I'm not sure how her fixation started, but she coveted frogs of all shapes, sizes, and materials. It made gift-giving easy, since she always welcomed another frog. It amazed me how many collectible frogs exist in the world. Once I became attuned, I saw them everywhere. There isn't an antique, gift, or garden shop without at least a frog or two.

Perhaps inspired by his mother, E. briefly collected elephants. Delighted, Reggie gave him a small bejeweled Indian elephant for his birthday and he acquired a few more on his own. But soon his attention drifted back to his larger passion, cars. Unless you're Jay Leno, though, there are only so many of those you can collect. 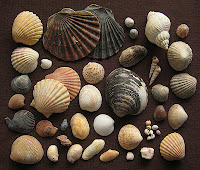 For some, collecting is a serious and fulfilling pursuit. One of my friends collects maps of the Arctic, another is an insatiable gatherer of shells, while several are devoted book collectors. My cousin's husband loves coins and can be found at many numismatic shows, happily perusing his favorite coin categories and trying to fill in gaps in his collection.

Another friend became such an avid collector of rabbits that he decided to open an antique shop to sell his overflow. Before long, though, he closed the shop. For him, the joy was in the collecting, not the selling.

The possibilities for collecting are endless—dishware and pottery, porcelain figurines, Star Wars paraphernalia, baseball cards, snuff boxes. One friend, a frequent flier, has acquired a rather large collection of airsickness bags.

So far, all these wonderful examples have failed to awaken a collecting passion in me. I've been wracking my brain for something fun and engaging. I like animals, but I prefer the live variety. Amassing a large number of rubber duckies wouldn't take the place of a breathing, quacking duck for me. My grandfather was a stamp dealer, but the idea of a stamp collection leaves me cold. Besides, at the rate the postal service is going, snail mail and stamps will soon become obsolete and there will be nothing new to collect.

I'm not much of a shopper, so I doubt I'd enjoy poking around stores for interesting objects. And I'm not fond of yard sales and the like, where some collectors find hidden treasures. Even used bookstores don't hold much allure for me. All those moldy books just make me sneeze.

My decorating style is minimalist, so I wouldn't really want a lot of tchotchkes taking up shelf space, which could be a problem if I decided to collect, say, Limoges boxes. My mother collected glass animals—she had cats, swans, dolphins, and other glass and crystal creatures. They looked pretty in her mirrored cabinet, but they wouldn't work in my spare living room.

Clearly, I need help. All thoughts are welcome. In fact, I'd love to collect all your collecting suggestions, maybe even compile them into a book. Now that's an idea!

Photos courtesy of Wikimedia Commons. Click on them to enlarge them.
Posted by Barbara at 8:17 PM 4 comments:

It can happen during broad daylight or darkest night. I can be fully awake or half asleep. I can be actively engaged with the bed while making it or merely passing by. Luckily, the bed frame doesn't come up to the level of my head or I'd be a goner by now.

One of my worst mishaps occurred a few weeks ago. I was turning the corner at the foot of the bed on my way to tucking in the blanket, when I stubbed my bare toe against the frame so hard that I thought I'd broken it. I writhed in agony for several minutes, then moaned and groaned for a while longer. My toe swelled slightly and turned a little blue, so I iced it and hoped for the best. I attempted to gain E.'s sympathy, but he was curiously unmoved.

After a couple of days, I made a full recovery. Nothing had been seriously wounded, except my self-image. Where was the agile woman I'd always longed to be? Why could I not glide gracefully around the bed instead of barreling clumsily into it?

After that incident, I became more careful. I gave a wide berth to the bed whenever I walked past it. Eventually, I believed that my efforts were paying off. I felt more sure-footed. I even fancied that I was on my way to becoming less of a klutz. It was as if my toes had developed a sixth sense about the location of the bed frame and could do a dainty side step to avoid it every time.

So, the other night when I got out of bed to get a drink of water, I felt prepared. Although it was dark, my mind automatically registered the location of the bed frame and my toes effortlessly moved in a way designed to avoid it. But my legs, alas, did not follow. The next thing I knew, I'd kneecapped myself on the bed frame. I cried out in pain, then moaned and groaned (and cursed) for a while, waking E. up in the process, but again earning little sympathy.

How is it possible, you might ask, to be far enough away from the bed frame with one's toes, yet whack into it with one's knees? An excellent question. I'm still working on the answer. For now, I've just accepted that it's all part of my klutzy life.