I first noticed the spider yesterday evening, sitting patiently on its web outside my window. I'm fascinated by spiders and very brave about looking at them up close when they're on the other side of a window. I wanted to photograph the creature but decided to wait until the bright light of morning.

When I opened the curtains today, though, the spider was nowhere to be seen. Not knowing much about spider habits, I thought it might have moved to one corner of its web, hidden from my view by the window frame. I went outside to take a look but couldn't find the spider anywhere.

Only when darkness began to fall did I see the giant arachnid back in the center of its impressive web, its outline clearly visible in the fading light, but its markings lost in the dimness. My only option if I wanted a picture was to try a little flash photography. Here is the result. Click on the photo to enlarge it. 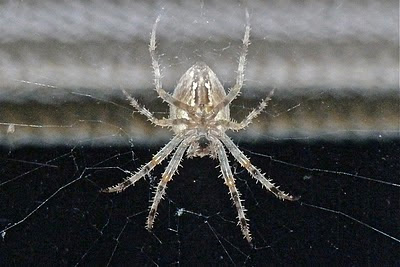 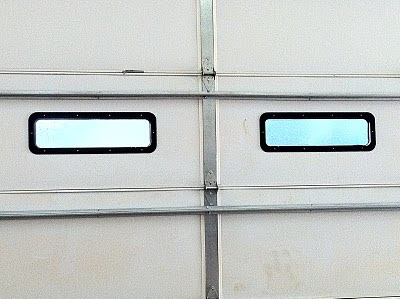 On the last day of summer, I found myself inside a garage, with no time to take a walk and enjoy the gorgeous weather. Enough to give anyone the blues. At least I had my iPhone camera along, so I could play around with it. These experiments may get tedious before long (for me as well as for you). But for now, here are my garage band blues. Click on the photos to enlarge them. 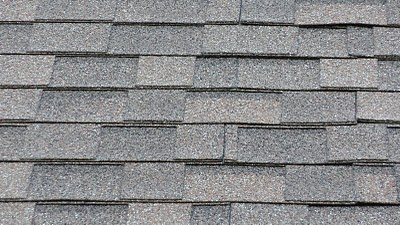 I've always liked the irregularity of the architectural asphalt shingles on my roof and their neutral palate suits my desire not to draw attention to myself or, by extension, to my house. But digital photography opens up whole new realms of possibility. A roof becomes a geometric pattern, becomes a pink palette, becomes an imitation pointillist painting. Click on the photos to enlarge them. 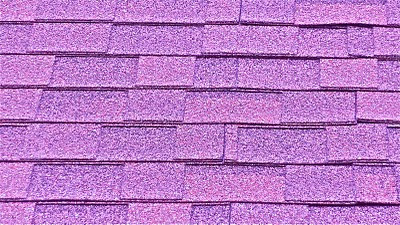 
I've been AWOL from this blog for a while but a recent trip to Newport, Rhode Island has inspired me to return and share some photos of my experience. I began enjoying photography last year, when I discovered how easy it was to take pretty good shots with my iPhone. And nothing heavy to carry!

I also found that I enjoyed embellishing my blog entries with photographs. And I began to get a sense of what I enjoy photographing. Wildlife certainly tops the list. Animals, birds, even insects—all are endlessly fascinating. I also became obsessed with sunsets. Beyond particular subjects, I love creating a composition that feels right to me. Whether architecture, people, or landscapes, I've found to my surprise that I have very strong opinions about what looks good.

A few months ago, I graduated from my iPhone to a Panasonic Lumix, a point-and-shoot camera (as opposed to a single-lens-reflex camera with a viewfinder). In Newport, I missed having the viewfinder as the sometimes-brilliant sunlight made it hard to see what I was about to photograph. But my Lumix does have a 12x optical zoom, which enabled me to capture many shots previously impossible with my iPhone.

On Newport's Cliff Walk, for example, I saw a seagull wrestling with a dead fish. The tide kept coming in and threatening to carry the fish out to sea and the gull kept repositioning itself in an effort to hang onto it long enough to finish eating. Only setting my zoom at the full 12x enabled me to get the following photographs. 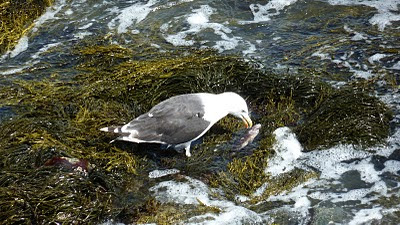 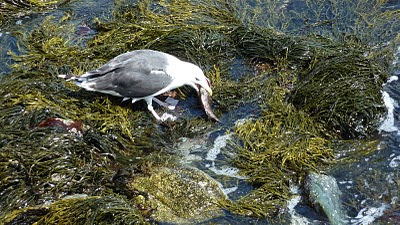 A group of cormorants sunning themselves on a rock appeared so distant to my naked eye that I wasn't sure at first what kind of birds they were. The zoom not only helped me get a decent photograph of them but allowed me to make a positive ID. 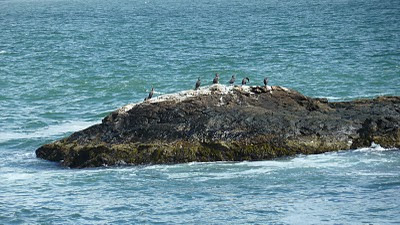 Later, I saw a flock of birds massed on the slate roof of one of the immense Newport mansions overlooking Cliff Walk. The zoom came in handy here, too. 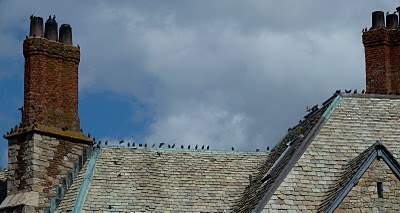 The Cliff Walk afforded many gorgeous views and interesting edifices. One of the more charming examples was this Chinese tea house. 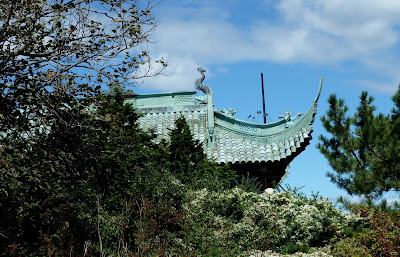 By afternoon, dark clouds had rolled in, creating different photographic opportunities. I like the idea that this shot taken from the roof of my hotel borrows something from Dutch landscapes, with modern cruise ships added. 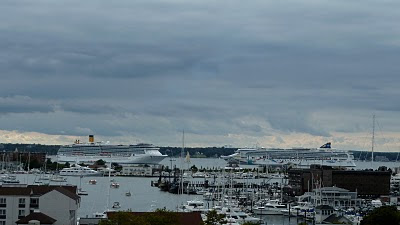 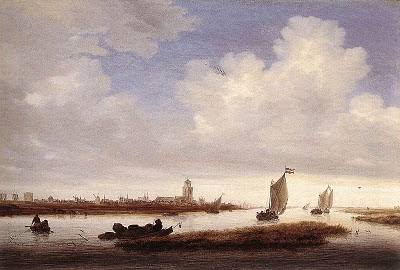 A walk down to the harbor gave me a chance to visit the Newport International Boat Show. While the mere thought of being at sea makes me queasy, I love to look at boats and I got a kick out of the boating scene at the show—lots of Top-Siders, lots of drinking, lots of camaraderie. And many boats for sale. The colorful banners of the different boat builders really caught my eye. 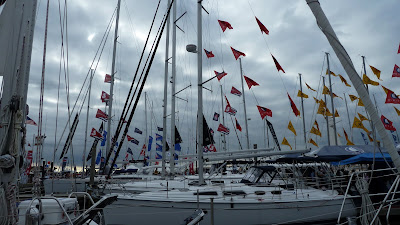 In the waning days of summer, I couldn't resist taking a picture of these lovely yellow blossoms, soon to be covered by autumn leaves. 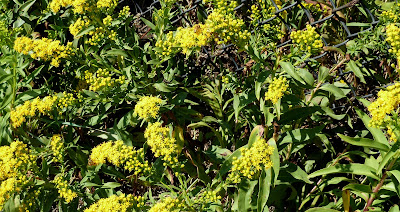 All the photos can be enlarged by clicking on them.
Posted by Barbara at 6:14 PM 3 comments: