The High Points of the Republican Convention

People will no doubt be discussing the high points of the Convention and arguing about them for days — after all, one person's high point is surely another's low. Take Ted Cruz's non-endorsement of Donald Trump during his Convention speech. To a Trump supporter, Cruz's snub brought the political discord to an all-time low, yet to a die-hard Never-Trumper it may have been the Convention's finest moment.

I'll let the pundits ponder all that. I'd rather focus on the Trump women and the impact of their convention speeches. I don't mean the bruhaha over Melania's plagiarism or the daughterly love displayed by Tiffany and Ivanka. While all that was mildly interesting, let's get real — the most fascinating aspect of their appearances, the absolute high points, were their ridiculously high stiletto heels.

I'm amazed that they managed to walk to the podium in those heels and stand tall during their speeches with nary a whimper of discomfort, let alone a grimace of pain. You may find my focus on women's shoes highly superficial, but I beg to differ. What could be a more important subject than women's continued subjugation to their footwear?

Admittedly, I'm one of those unfortunate women whose feet have never felt good in high heels. Were I to walk a few steps in Melania's Christian Louboutin's, let alone a mile in her shoes, I would be crippled for life.

I didn't expect things to turn out that way. My mother loved wearing heels, the higher the better, so much so that her Achilles tendon shortened and made it uncomfortable for her to wear flats. As a girl, this seemed to me the height of sophistication and I always assumed I would follow in her footsteps.

Alas, I inherited the dysfunctional feet of my aunt and grandmother. By the time I was a teenager, I had to give up my dream of spike-heeled glamour in favor of sensible, low-heeled, round-toed shoes. Luckily, I came of age in the late sixties, when the women's lib movement made sensible footwear all the rage, so I was able to camouflage my disability within then-stylish comfortable designs.

During the mid-seventies, I became an early-adopter of orthotics. They saved my feet, although of course they could only be worn in the most utilitarian of shoes. By the time women's heels began to climb back into the stratosphere, I wasn't tempted. I'd come to appreciate comfort over beauty. Yet, I'd never quite gotten over my regret at not being able to wear stilettos. In the late-nineties, Sex and the City fueled my fantasies of the life I might have lived if only I'd been born with different feet.

These days, images of fabulous footwear are everywhere — from the film stars on the Academy Awards runway to Robin Wright as the House of Cards' ice queen in heels. So, I wasn't really surprised when the Trump women strode onto the stage wearing dangerous-looking, sexy five-inch heels. Still, was this appropriate for a Republican gathering? Shouldn't they have worn something a little more staid?

Maybe, but truth be told, I was jealous. All three women had the air of females who had never had a foot pain in their lives. If they couldn't empathize with aching feet, I wondered, how could they possibly relate to the average voter? I was caught in a paradox — I simultaneously disapproved of the Trump trio and envied them. Never mind that along with eschewing high heels, I don't like wearing makeup, nail polish, or even Spanx. It's not as if there but for high heels go I.

Perhaps I should forget footwear and focus on the upcoming election. I'm looking forward to the Democratic Convention. But while I wait for it to begin, I can't help but wonder — how high will Chelsea's heels go?

I took a walk yesterday morning. It was a beautiful day, but cold, the temperature barely above forty degrees. So, I bundled up in a parka warm enough for a blizzard, a thick scarf, gloves, and of course my special sunglasses with wind shields. Do I look a little odd in those glasses? Yes, but if it's cold and windy, or even a bit breezy, without them my left eye will start tearing in a nanosecond and soon I'll be crying a river. They aren't prescription lenses, however, so while I may not have tears streaming down my face, I can barely see where I'm going. 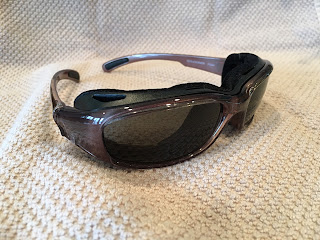 I realize that, like me, some young people suffer from dry eyes, which paradoxically can cause excess tearing. They may also resort to special glasses like mine. But since I developed dry eyes later in life, I regard the glasses as a sign of approaching decrepitude. Next thing you know, I'll barely be able to walk.

Come to think of it, only a few weeks ago I was barely able to walk. I sprained my big toe while standing on my tiptoes to give my son, Aaron, a hug. He's not even that much taller than me, but all it took was a slight hyperextension of my toe to produce a piercing pain. Luckily, Aaron was just leaving for the airport after a lovely visit, so I didn't have to face the indignity of hobbling around in front of him for days, all because I hugged him too enthusiastically.

Was this toe mishap yet another sign of encroaching old age? A quick google of my symptoms indicated that I most likely had a mild case of turf toe, an injury common to young athletes, especially those who, like football players, constantly push off with their toes, especially on astroturf. So, okay, this could happen to anyone. But, it happened to me when I wasn't doing anything remotely athletic, except over-bending my slightly arthritic toe. Even if it didn't occur because I'm older, it certainly made me feel old.

I'm able to walk normally now, but every once in a while I get a twinge, a reminder that I could re-injure my toe all over again. Maybe that's a good definition of life over 65 — a time when the most trivial of injuries seems destined to lead to total disability and inevitable demise. Stating the obvious, my demise is inevitable, but while I once assumed that I'd bounce back from even serious illness, now the most minor ailments convince me that it's all downhill from here.

Yesterday, though, I felt hale and hearty enough to brave the elements and walk for several miles. My toe didn't throb even once and my glasses did their job admirably. I passed several wild turkeys during my perambulation and none of them attacked me. All in all, it was a delightful outing. I may be older, but I'm still walking.

I recently saw the excellent film, Bridge of Spies. In the movie, which is based on a true story, Tom Hanks plays a lawyer, James Donovan, who defends Rudolf Abel, a Russian spy. A couple of lines from the movie particularly resonated with me. Given the title of this blog post, you won't be surprised which ones.

When Donovan meets Abel shortly after his arrest. Abel seems calm and unconcerned about his dire situation. Donovan, perplexed by this, asks, "Aren't you worried?" Abel replies, "Would it help?" This exchange becomes a humorous refrain throughout the film. Later, Donovan asks more pointedly, "Do you never worry?" Abel's reply is still the same.

These exchanges are oddly endearing and signal a growing respect between the two men. To me, they also signal an unattainable state of mind. If only I could make a decision not to worry and stick with it for more than a nanosecond.

After I saw the film, I found myself imagining the life of a spy. Clearly, not being a worrier would help. Spies, after all, live in constant danger of discovery, arrest, or even death. Not only would worrying not help; it might create a self-fulfilling prophesy, since any outward sign of anxiety — worried glances, furtive looks, trembling hands — could give them away.

I'm a fan of the AMC series, The Americans. Watching it, I'm often amazed that the Russian spy couple, Elizabeth and Philip Jennings, can make it through five minutes, let alone their entire lives, without being (literally) consumed by worry. The "otherness" of the characters is partly what I love about the show. There couldn't be people more different from me than the Jennings, unless perhaps undercover narcotics agents or Formula One race car drivers.

As surprising as it may seem (to me at least), many regular people (and one I actually live with) aren't worriers. They care as much about their friends and family as I do, but if they're concerned about an issue whose outcome they can't control, they're somehow able to put their worry into a secret compartment (secret to me, anyway), and get on with their lives. Why worry if it won't help?

I'm so not one of those people. Even when those I love are healthy, I worry that they might get sick. If someone I care about has a job interview, I worry that he or she will be rejected. If I'm planning a long drive on a beautiful day, I worry about brake failure and sun glare. Okay, not really. Well, maybe just a little.

My guess is that a person like Rudolph Abel could no more choose to worry than I can choose not to. Still, this being New Year's, I'm tempted to make a resolution to worry less in 2016. But would it help? Not likely.