During the summer of 1969, after my sophomore year of college, I was living at home on Long Island and working in the billing department of a commodities firm. I watched the moon landing with my parents. A few weeks later, on August 13th, I was heading out to lunch, completely unaware that the astronauts were being celebrated with a ticker tape parade on Wall Street, right around the corner from my office.

As I walked out of my building, I encountered a crush of people and could see ticker tape flying. I followed the throng and got a distant glimpse of the trio of astronauts—Neil Armstrong, Edwin Aldrin, and Michael Collins. It was a thrilling moment, marked by the odd realization that I was almost the only woman in sight. Wall Street was then so dominated by men that even the secretarial pool couldn't make a dent in the impression that the street was men-only. 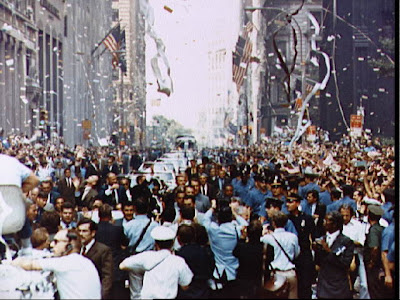