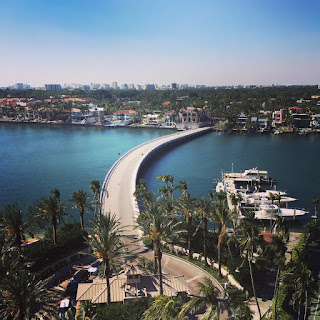 I've been splitting my time between Boston and Miami since 2005. When I'm in Miami, though, I never fully leave Boston, and vice versa.

Years ago, while in Miami, I started listening on my iPhone apps to WBUR and WGBH, the Boston public radio stations. Sometimes, I'm listening to a Boston radio station and the announcer begins describing blizzard conditions. I feel confused. Where am I? It takes me a minute to realize that if I step onto my terrace it will be seventy degrees and sunny.

When I'm back up north, I keep part of my psyche in Miami by listening to WLRN, South Florida's public radio station. There, I get updates on the latest local news, plus notices about cultural happenings, all delivered by an incongruously British-accented announcer. And during football season, WQAM, a Miami AM radio station, keeps me dialed into the University of Miami Hurricanes games, complete with the two wackiest sportscasters I've ever heard.

In Miami, E. and I live in an apartment, while in Boston we share a house. The living spaces couldn't be more different. However, we've tried to replicate our belongings, so that one place feels as much like the other as possible. Our idea has been to create a seamless transition when we travel between our two homes.

We have the same sleep number mattresses in both places, the same desktop computers, the same television sets, even the same thermostats. We would have purchased the same flatware, but for some reason our stainless steel pattern (purchased in 1972) was no longer available. We did go wild with our dishes, though. Our set up north is solid white, but for our Miami condo we chose a pattern with a white background and black stripes around the rims.

I could go on, but you get the picture — E. and I don't do well with change. We're homebodies and we like our two homes to feel like one. If the winters weren't quite so severe up north, we would never have thought about spending the cold months elsewhere. Yet, despite our best efforts to set up identical lives in both places, I feel completely different when I'm in Miami than when I'm in Boston. 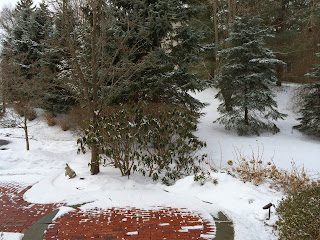 That's not so surprising, given how different the two cities are. Miami's vibe is exotic and flamboyant, while Boston feels more intellectual and grounded. But here's what does surprise me — I love both places! I especially love that they're different. That's a good thing, right? Of course it is, but it also makes leaving either place hard.

This year has been particularly difficult. We had said goodbye to our friends in Miami and had made plans back in Boston when the weather intervened, with a major nor'easter threatening. American Airlines even offered to waive our change fees. So, we postponed our departure for several days.

The storm has come and gone and I'm still in Miami, in limbo. It feels odd, but oddly comforting. My bags are packed and I'm not unpacking them. E. and I have made new plans with the friends to whom we already said goodbye. And I'm enjoying the gorgeous weather here, although it doesn't feel quite real, since I know I'll soon be back in chilly Boston.