In my last post, I described the medical crises that led E. and me to decide that Cosmo should be put to sleep. But there were also several strange coincidences and happenings that reinforced our conviction that Cosmo's time had come. If I were a religious person, I might interpret these events as divine intervention. Instead, I prefer to call them signs and portents.

The first of these occurred the day before Cosmo's death, as E. and I returned home from a walk. I was telling E. that I had decided to stop agonizing about how we would decide if and when the time had come to euthanize Cosmo. I said I believed we would just know. Suddenly, E. exclaimed "What's this?" 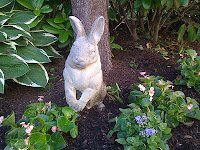 It was our stone bunny statue, which stands in the flower bed adjacent to our front walk. The bunny had fallen face-down in the soil. That bunny has stood on the same spot since we moved into our house ten years ago. In fact, it's at least as old as Cosmo, having adorned the garden in our prior house as well. The statute has survived nor'easters and blizzards without ever toppling over.

E. quickly righted the bunny and re-set it on its appointed spot. We shrugged off the occurrence, but it rattled us nonetheless. A sign that we should think about ending Cosmo's life? Hardly, yet in retrospect it seemed a portent of Cosmo's own shocking collapse the following morning from a massive seizure.

That evening, E. and I watched the last episode of the first season of Deadwood, an HBO series set in the late-nineteenth-century American west. One of the characters is a minister who begins having seizures in an earlier episode. Eventually, the local doctor realizes that the poor man has a brain tumor. By the last episode, his condition has become dire. His seizures are terrible, with his limbs and head contorting uncontrollably. The doctor prays that God will take him. Finally, in a strangely moving scene, one of the main characters enters the room where the minister lies and, while embracing him, smothers him with a handkerchief, euthanizing him.

The next morning, when Cosmo began having his own terrible seizure, as I tried to hold him and comfort him, E. and I looked at one another. "The minister," E. said. The way Cosmo's limbs and head contorted reminded us of the seizure we'd watched on the television drama the night before. The minister's seizures had finally been stopped by a mercy killing. Was this a sign?

Now rewind to just a few short moments before Cosmo's seizure began. Until then, it had seemed like an unremarkable morning. E. had taken Cosmo out for a brief walk and Cosmo was sitting on his mat in the kitchen, as usual. I was preparing a bowl of cereal for myself. Cosmo normally liked to wait until I began eating my breakfast before eating his food. Prior to sitting down at the table, I glanced at the latest New Yorker to see if there were any articles I wanted to read. My eye was immediately caught by an article by Atul Gawande. Its title — "Letting Go - Rethinking end-of-life treatment."

Although I knew the title referred to human end-of-life dilemmas, I immediately thought of Cosmo and set the magazine on the table so I could read the article. I turned toward Cosmo and noticed that he was trembling. I knelt down beside him and petted him. He seemed to calm down. I stood up to get a spoon for my cereal and when I glanced at Cosmo again his limbs were contorted and I realized he was having a very strong seizure. So, rather than reading an article about end of life, the next hour found me considering whether to actually end my dog's life. Another sign? I'd like to think so, because somehow that allows me to pretend that Cosmo's fate was predetermined and not merely the result of a coldly rational decision.

Eight days have passed since Cosmo's death. I'm still struggling with the trauma of putting him to sleep, but a little less so during the past couple of days. I've realized that I've been using my guilt about being the agent of Cosmo's death as a way to avoid facing my grief. There's never a right time to lose an animal you love, even if all the signs tell you it's time.
Posted by Barbara at 6:04 PM 3 comments:

Making the Decision to End Our Pet's Life

I still can't believe Cosmo is gone. As hard as it feels to lose him, there's something especially haunting about having been the one (along with E.) who decided to end his life.

I never thought it would come to this. While I knew that many pet owners put their ailing pets to sleep rather than allow them to suffer, I preferred to imagine that Cosmo would remain healthy until he was very old, then would simply go to sleep on his comforter beside our bed and never wake up. Unfortunately, that's not the way it happened.

By the time Cosmo reached his thirteenth birthday this past June, he had significant health issues. Controlling his seizures required ever-higher doses of medicine, which put his liver and pancreas at risk. Recently, he began showing a variety of disturbing symptoms — excessive thirst, excessive hunger, hair loss, panting, fatigue, muscle weakness, and a distended belly. In addition, he injured one of his front legs, so he had to be carried up and down the stairs.

Due to the muscle weakness and leg injury, Cosmo couldn't accompany us on long walks. We still took him for strolls around the neighborhood, but often he had to be carried most of the way. In retrospect, I can see that Cosmo's quality of life was eroding before my eyes, but the decline was gradual enough that I remained in denial for a long time.

Then Cosmo began showing signs of incontinence. His excessive thirst, which led to excessive drinking and an over-full bladder, was taking its toll. This new symptom couldn't be ignored. Cosmo had been totally house-trained by the time he was eight days old and had never had an accident in thirteen years. A little Googling regarding the incontinence revealed that, combined with all his other symptoms, Cosmo probably had Cushing's Syndrome, which is caused by excess production of cortisol, a steroid. I took him to the vet, where tests confirmed that he indeed had Cushing's.

Cushing's is an awful disease when left untreated, but the vet told me that a new medication, trilostane, could treat Cushing's with great success by suppressing production of cortisol. She was optimistic that if we could get both the Cushing's and Cosmo's seizures under control, he would feel well and function well again. So, we started him on the trilostane.

We'll never know exactly what happened on that fateful morning to cause a seizure a hundred times worse than the mild partial seizures Cosmo had always experienced before. The massive seizure took place on the fourth day after we began the trilostane, just as it was reaching effective levels. Apparently, the suppression of cortisol due to the trilostane had a catastrophic affect on Cosmo's body's ability to regulate his seizures.

Once Cosmo began seizing, at around 7:45 a.m., he didn't stop. Despite the seizure's severity, Cosmo appeared to be conscious, making the situation all the more heartrending.

I felt immediately that the trilostane had something to do with the seizure, since absolutely nothing else had changed in his treatment. I realized we faced a terrible choice — if we were able to get the seizure under control (a big if), we could stop giving Cosmo the trilostane, but then the Cushing's Syndrome would continue to worsen. On the other hand, if we kept Cosmo on the trilostane, we risked another horrible seizure, something I couldn't bear to think about, for Cosmo or for myself, either.

At 8:30, when my vet's office opened, I called her. Cosmo's seizure hadn't stopped. While she offered a couple of treatment options, like trying a different seizure medication, she felt that it made sense to consider putting Cosmo to sleep. But, of course, she left the decision to E. and me. We agonized for a while, then called and arranged to bring Cosmo to her office at 10:30 a.m.

Though I had always hoped Cosmo would live a long, healthy life and pass away painlessly in his sleep, during his last weeks I had faced the fact that if I wanted to prevent him from suffering, I might have to intervene and have him euthanized. I wondered how I would know if and when the time came. Despite Cosmo's worsening health, he still sometimes acted like his normal, adorable self. How could I choose to put him to sleep while he still had a reasonable quality of life?

But that was exactly the point. I didn't want Cosmo to suffer. I wanted him to die before his life lost all joy. As it was, I wasn't really sure whether or not Cosmo was in pain. A few years earlier, he'd had a terrible tooth abscess that was discovered during a routine dental cleaning. As far as I could tell, Cosmo hadn't been in any pain from the abscess, yet the dental vet told me it probably hurt him a great deal.
"Dogs are stoics," he said.

During the week before his death, I did have one indication that Cosmo was in pain. When holding him, I was always careful not to put pressure on his distended belly. Nevertheless, during that last week of his life, when I picked Cosmo up, he would sometimes breathe in with a catch in his throat and then emit a long sigh. He sounded sad, as if he were hurting.

In the end, the magnitude of Cosmo's final seizure made it clear that the time had come. I'm grateful that I was home when it occurred, so I could hold him and offer some small comfort to alleviate the terror he must have been feeling. I'm also grateful for the loving care he received from my vet. She sedated him so that he fell gently asleep in our arms, then took him from us to administer the fatal dose of barbiturate that would end his life.

Despite believing that we made the right decision at the right time, I nevertheless have experienced guilt in addition to grief. It's hard playing God. But I'm comforted by my conviction that Cosmo wouldn't blame me. He loved me unconditionally. An old New Yorker cartoon expresses my feelings perfectly — "Please God, help me be as good a person as my dog thinks I am."