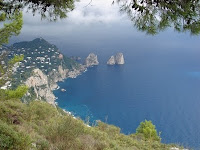 Although I'm not the world's greatest traveler, I've been to quite a few places and have seen many spectacular views. For natural beauty, few sights can surpass the Grand Tetons rising above Jackson Lake. Mt. Rushmore, with the faces of Presidents hewn into rock, inspires awe. Other views are memorable for their quiet beauty, like the exquisite sunken garden at Butchart Gardens in Victoria, Canada. The splendor of the Mediterranean, seen from the isle of Capri in Italy (photo above), can only be described as breathtaking. The world is full of amazing views. But my favorites tend to be those that are both beautiful and familiar.

I never tire of looking at Biscayne Bay from my Miami apartment. When I'm in Boston, I thrill to the sight of the Charles River as I drive alongside it on Storrow Drive. As the road winds its way toward Cambridge, I catch a glimpse of Harvard's cupolas, which always pleases me.

Another view enhanced by familiarity is New York City's skyline, which I've known since childhood. Nowadays, I'm usually driving on Bruckner Boulevard in the Bronx, en route from Boston, when the city first looms into view. As I make my way along that gritty highway, the Empire State Building emerges as the pinnacle of a vast and gleaming metropolis. The vista invariably fills me with wonder. 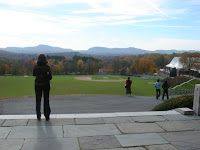 Perhaps my favorite view of all is the Holyoke Range in western Massachusetts, seen from Memorial Hill at Amherst College. During the year I spent at Amherst as a student, I frequently visited the War Memorial, which is located at one end of the campus quadrangle. There, I would linger for a long time, gazing across the playing fields at the gentle undulations of  the ancient mountain range. I invariably experienced both exhilaration and a sense of peace. On subsequent visits, I've still felt inspired by the view. Its beauty and familiarity combine with my nostalgia to make me want to see it again and again.

I recently discovered that the college has a live webcam focused on the Holyoke Range from the Science Center, quite near the War Memorial. By clicking the link, you can visit virtually.