And the Winner Is 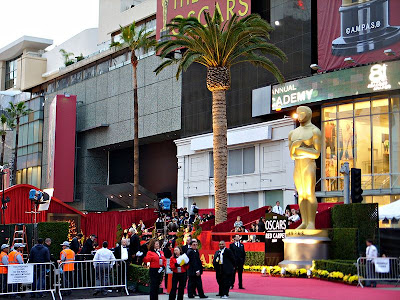 I love watching the Academy Awards. I particularly like seeing what the female celebrities wear, how they do their hair, what fabulous jewels they borrow for the event, and whether they've chosen bright red lipstick or pale purple eye shadow. Even though I'm old enough to be an AARP member, on Oscar night I fantasize about being young and glamorous and the object of adoration.

What's wrong with this picture? Anyone who knows me would consider my Oscar fixation anomalous. I'm the antithesis of glamor, unless you consider dressing mostly in black glamorous. In my case, I do it so I don't have to think too much about clothes. As revealed in my recent post, "If the Shoe Fits", I would limp across the red carpet if forced to walk in the stiletto heels favored by many actresses. I wear almost no makeup, adorn myself with very little jewelry, and still style my hair pretty much the way I did in high school. You'd think the last thing I'd want to do is watch a bunch of pampered stars strut their stuff.

But for me, that's entirely the point—that I'm nothing like these women is why I find them so enthralling. That's why I still watch reruns of "Sex and the City" and why I look at Vogue magazine in waiting rooms. I'm captivated by  fashionable women in the same way that an anthropologist might be fascinated by scarification practices among primitive tribes. I especially look forward to studying the Hollywood tribe during its annual preening ritual.

It will be interesting to see how Steve Martin and Alec Baldwin perform as joint hosts at this year's ceremony and I'll enjoy finding out who wins the golden statuettes, with all the attendant drama and frothy speeches. But those aspects of the awards fest pale in comparison to what I really care about—whether Meryl Streep will choose another frumpy dress and whether Anne Hathaway could possibly be any thinner.

Photo courtesy of Wikimedia Commons.
Posted by Barbara at 8:50 PM