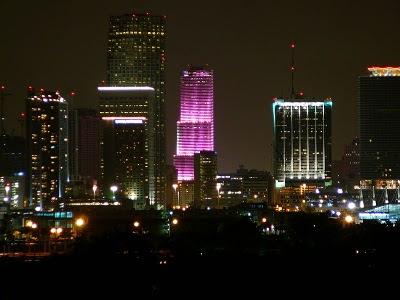 Last night, I attended the East Coast premiere of Please Give, a delightful independent film, directed by Nicole Holofcener, with wonderful performances by the entire cast, including Catherine Keener and Oliver Platt. The screening, part of the Miami Film Festival, took place at the Olympia Theater in downtown Miami. The theater is a work of art in itself, having been recently restored to its original 1926 glory, complete with ornate Moorish architecture, simulated night sky, and live pre-show performances on the Olympia's original Mighty Wurlitzer organ.

After the film, I left the theater feeling I'd been treated to a charming, sad, funny cinematic experience. But the real show was yet to come. As I walked around the corner and into the outdoor lot where my car was parked, I happened to glance up. There, in all its glory, stood the Bank of America Tower, aglow in white light, with clouds swirling around its upper stories. The building is an iconic presence on the city's skyline, lit in a varied array of colors during holidays. Last night, though, the tower loomed so close and the sight of it was so unexpected that it took my breath away. I recovered in time to snap the photo below. 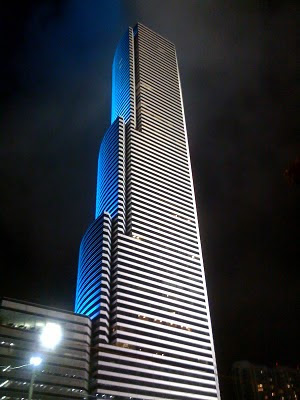