Today I experienced a quintessentially Coral Gables moment. E. and I stopped for lunch at California Pizza Kitchen, about as American a restaurant as can be found. I ordered the BBQ chicken chopped salad and was happily munching away, when five women sitting nearby began singing "Happy Birthday" to the only man at their table.

The man looked both pleased and self-conscious as the women sang the familiar song. But one thing sounded distinctive about it—though the words were in English, the accent was Spanish. All the women clearly spoke English and sang the song with ease, but their first language was apparently Spanish. This was confirmed after the man blew out the birthday candle on his dessert, when all six resumed their conversation entirely in Spanish.

For me, this moment captured the gestalt of Coral Gables, a sophisticated community where many residents and business people speak Spanish as a first language. Most, however, also speak perfect English, though perhaps with a slight accent. This "accent" characterizes the culture here—American with a Latin flair. Well-dressed Coral Gables women favor a particularly feminine style of dress, at least compared to more straight-laced Bostonians. And people seem very comfortable showing affection in public. I often see daughters, even in their twenties, holding hands with their mothers as they walk down the street together. Not something I'm used to seeing in other American cities, but a behavior I remember well from summers spent in El Salvador and Mexico. 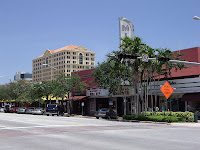 When I walk on the Miracle Mile in Coral Gables, overhearing snippets of Spanish conversation and enjoying the summery weather and palm trees, I sometimes imagine I'm taking a paseo in Mexico City or another Latin American capital. But in reality Coral Gables more closely resembles an American city like Palo Alto, only with a Spanish accent.

Click on photo to enlarge.
Posted by Barbara at 6:21 PM