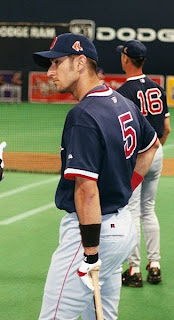 In a sweetly-contrived scenario, Nomar Garciaparra re-joined the Red Sox for one day and immediately announced his retirement, enabling him to retire a Red Sock. Nomar had approached Sox owners and General Manager Theo Epstein with the idea and during his press conference, he appeared genuinely thrilled and sentimental about having been granted his wish.

Most of the fans and even the media seemed to appreciate the gesture, given the coverage of the event. Leave it to Dan Shaughnessy to put a fly in the ointment, reminding us how truly unpleasant relations between "Nomie" and the organization became during the 2004 season, leading to Nomar's departure as part of a trade with the Chicago Cubs.

By returning to the Red Sox as the sun sets on his career, Nomar rekindles memories of his greatness during his early years with the Sox. As even Shaughnessy concedes, "A case can be made that he was Boston’s best home-grown player since Carl Yastrzemski." While the quality of both Nomar's play and his disposition suffered during that final season with the Sox, it may be that his subsequent experience with three other teams (the Cubs, the Los Angeles Dodgers, and the Oakland Athletics) caused him to appreciate how truly special his years with Boston had been. He never regained the on-the-field greatness he achieved during the first five of his eight seasons with the Sox and he surely never encountered fans who adored him the way Red Sox Nation did.

Like most sports fans, I'm not terribly rational when it comes to players who leave my team. I never forgave Roger Clemens for bailing, or Pedro Martinez, or Johnny Damon, or even Manny Ramirez. I took it personally—a rejection of me and my beloved city and team. Nomar's departure technically occurred because of a trade rather than a voluntary decision to leave, but his own behavior clearly led to that happening. I was disappointed and angry when Nomar left, even though I agreed that he hadn't been performing well, on the field or off. When the Red Sox went on to win the World Series that season, I admit to thinking So there, Nomar. You didn't like us and now we showed you. Not my finest moment, but that's what a passion for the game can do to a person.

Now, Nomar has affirmed his love for my city and my team. If he can be humble enough to ask for the privilege to retire as a member of the Red Sox, I can be magnanimous. Welcome home, Nomar!
Posted by Barbara at 4:52 PM