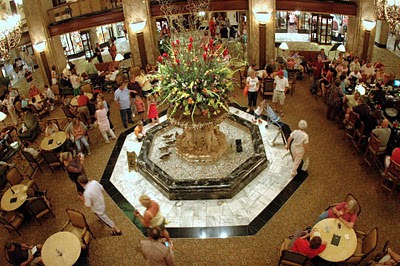 I just returned from a glorious weekend in Memphis, where E. and I attended the marriage of our son, Aaron, to his college sweetheart, Karen. I could go on at length (and possibly will, in a later blog) about the joy I felt watching Aaron and Karen become man and wife, surrounded by my family and friends. It was a bi-cultural affair, with Karen's Chinese family celebrating alongside us, merging Eastern and Western traditions.

The setting was the Peabody Hotel in Memphis, Tennessee, where Karen grew up and where almost all her family lives. She and Aaron chose the Peabody because it's a lovely historic hotel with a great rooftop party room. They also liked its location near Beale Street, famous for Memphis blues music, and its proximity to the Mississippi River, a short walk away. But, knowing Aaron's fondness for animals, I think what sealed the deal was the fact that at the Peabody Hotel you not only get nice rooms, good food, and a friendly staff — you also get the Peabody ducks.

In a tradition that started in 1933, every day at 11:00 a.m. four or five mallard ducks descend in one of the hotel's elevators from the roof to the lobby where, to great fanfare, they "march" on a red carpet from the elevator to the marble pond in the center of the lobby. There, they spend their day eating, swimming, and preening themselves until, at 5:00 p.m., after a rousing sendoff by the "Duckmaster," they waddle back onto the red carpet and into the elevator, which takes them to their rooftop "Duck Palace."

It all sounds rather silly and juvenile, but the ducks are adorable and appeal to just about everyone. Their presence gives the Peabody character lacking in most big hotels. During our five-day stay, E. and I watched the ducks march on several occasions, but until our final morning, we hadn't checked out the Duck Palace. On that last morning, we rode the elevator to the roof for one more view of the Mississippi. Once there, we noticed a sign for the Duck Palace and decided to take a look. It was about 10:45, so we knew the Duckmaster would soon arrive to escort the ducks down the elevator to the lobby. 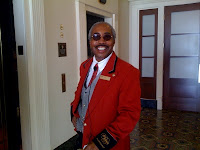 The ducks live in uncommonly fancy surroundings, which include a small swimming area, but when we arrived they were resting on a granite platform. We were rather surprised to find ourselves the only people there. We'd been down in the lobby a few minutes earlier and it had been jammed with hotel guests already lined up along the red carpet, awaiting the ducks' arrival. But on the roof, we had the ducks all to ourselves. At about 10:55, they suddenly perked up and a moment later, the Duckmaster came walking around the corner. We felt like privileged spectators as we watched the ducks literally run out the door of their palace and across the roof deck toward the elevators, only stopping when the Duckmaster told them to "wait." 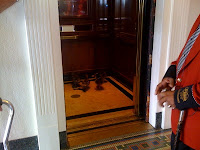 The Duckmaster invited us to ride down the elevator with the ducks. When we reached the lobby, the doors opened, the crowd cheered, and the ducks hightailed it onto the red carpet. It was a hilarious sight to behold and a fitting end to our wonderful wedding weekend at the Peabody Hotel.

To get a sense of the Peabody duck tradition in action, take a look at the following Animal Planet segment on YouTube.