I've lived in Newton for 28 years. During that time, I've noticed an evolution in the bird population. For many years, crows were everywhere. With their imperious caws and intimidating size, they ruled the Newton roost. In winter, their gatherings were particularly impressive, with their black shapes sometimes filling every bare tree limb in sight. Newton was home to many other birds as well — robins, cardinals, bluejays, mourning doves, sparrows, nuthatches, and titmouses, to name a few. But the crows, with their intelligent eyes and hulking appearance, definitely dominated.

About fifteen years ago, I began to notice the occasional red-tailed hawk. Once, I watched a hawk standing guard over its latest kill, a crow. I always knew when a hawk was in the area because I heard the cries of the crows, who would harry it in the air, cawing and buzzing it incessantly. The hawks were a nuisance and even a minor threat to the crows, but that's not what led to their local demise. That took a disease, the West Nile virus.

About ten years ago, the virus struck New England birds. Crows were hit particularly hard. I began to see dead crows in the street, but not so many in the sky. Within two years, the local crow population was decimated. This apparently created an opening for an opportunistic bird species. Before long, I began seeing northern mockingbirds. Soon they inhabited my neighborhood in great numbers.

For the past few seasons, however, robins have supplanted mockingbirds as the prevalent species. In addition to the pair that nested under my own deck, I see robins hopping about on every lawn in the vicinity. And lately, I've hardly noticed any mockingbirds at all.

Yesterday, I wrote about three robin chicks who left their nest, prodded along inadvertently by my own proximity. A few years ago, when mockingbirds held sway, I became similarly engaged by a drama in my backyard. I wrote a poem about the experience, which I've reprinted below. In that case, I was merely a witness, rather than a causative agent, in the events that unfolded.

The baby mockingbird crashed
into my window and fell,
stunned, to the ground. I waited,
helpless, picturing myself
engaged in bird burial,
until it managed to lift
off, staggering in mid-air
as if drunk on first flight or

too young to have left the nest.
Determined, it launched itself
toward the pear tree and perched there,
chirping a feeble cheep, cheep,
until its mother swooped in,
bringing her bird version of
comfort, protecting her chick
with impressive vigilance.

I aimed my binoculars,
viewed the drama from polite
distance, saw the frail fledgling
close its weary eyes and rest
its beak in its own feathers.
For several days, I heard
the plaintive cheep, cheep from one
nearby tree or another

and saw the mother guarding
her offspring from a roof edge
or a neighboring treetop,
singing her borrowed love songs.
If only she could defend
her fragile child long enough
for it to gain strength, perhaps
it would survive and take wing.

A few days later, I found
a baby mockingbird dead
on my front walk, its mother
gone. Now every mockingbird
reminds me of that mother,
trilling her infinitely
varied tune, its melody
a bird’s poem of devotion. 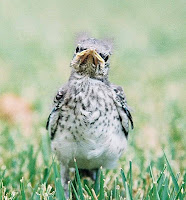 After learning about the robins' nesting habits, it occurred to me that I might have misunderstood what happened to the mockingbirds I wrote about. This morning, I did some research about mockingbirds. I discovered that when the chicks are about twelve days old, they leave their nest. They don't fly immediately, but rather hop around on the ground or in low shrubs. During this transitional period (after leaving the nest and before they can fly), the parents still care for the young birds, feeding them up to five times per hour. This continues for several days, during which the male teaches them how to fly, until the fledglings are capable of sustained flight and can forage for themselves.

It now seems likely that the baby bird in my poem had left the nest as mockingbird chicks normally do and, during an early flying experiment, had crashed into my window. The adult's hovering behavior was apparently normal for that stage of its offspring's development. I did see a dead mockingbird on my front walk, but I now believe it may not have been my mockingbird. My poem's little chirping creature, under the guidance of its devoted parents, may have survived to live a productive bird life and produce many offspring of its own. Of course, I'll never know, but I can always hope.

Click on the photos to enlarge them.
Posted by Barbara at 10:11 AM