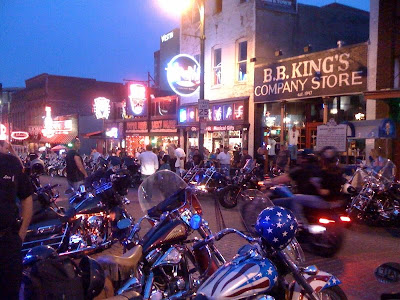 E. and I arrived in Memphis last Wednesday, a few days before the wedding of my son, Aaron, to his bride, Karen. As we approached downtown in our rental car, E. reminisced about the last time he had visited Memphis, 40 years earlier. He had been traveling through the south during the summer of 1970, interviewing locals about blues musicians — research for his college thesis.

We already knew one another back then, though we weren't dating. Forty years later, it was hard for either of us to believe that so much time had passed since he'd gone on that trip, a long-haired white kid driving a weird Swedish sports car, his Saab Sonett, and venturing into down-and-out black neighborhoods.

Later, we walked over to Beale Street, the heart of the Memphis blues scene. E. was amazed that it looked much as he remembered, though fixed up and filled with tourists. That evening, motorcycles lined the street, each one more shiny and spectacular than the next, their owners gathered for some kind of rally. Blues music poured out of the open doors of clubs, the rhythms reminding me of my youth, when E. collected blues LPs and we listened to blues artists perform live whenever we could.

As we surveyed the lively scene, my eye was caught by signs for the B.B. King Blues Club and B.B. King's Company Store. The great blues guitarist and singer-songwriter got his musical start in Memphis, where he earned the nickname "Beale Street Blues Boy," later shortened to B.B. King. All this interested me because it gave me my own tenuous connection to Memphis — back in the seventies, I interviewed King for a column in Guitar Player Magazine.

At the time, I was an editor at the magazine, hired more for my language skills than my musical ability. Though I played the piano and could read music, I knew little about the guitar. Still, when the opportunity to interview B.B. King arose, I jumped at the chance. With the help of my senior editor, I came up with a list of questions designed to make it sound as if I really understood the instrument.

At Guitar Player, we took our mission seriously — no celebrity gossip for us. We wanted to give our readers tips from the guitar greats about how they achieved their unique sounds. I arrived for the interview nervous but excited. B.B. King invited me into his dressing room. He was gracious and kind. Within thirty seconds, he probably knew I didn't play the guitar, but he answered my scripted questions patiently and thoroughly. A few times we were interrupted by visitors, most of them women. King invariably asked them to "Gimme a little sugar," and kisses were exchanged.

Just as I finished my last question, the door opened and a man clad in a white suit entered — Santana. He faced us and put his palms together in a Hindu-style greeting and bowed. It was quite a moment, the accolyte acknowledging the master.

All this came back to me in a rush as I stood on Beale Street, where B.B. is still king. In the days that followed, I would be establishing a much more important connection to Memphis, with the family of my new daughter-in-law. But for a brief moment, I was transported back to my own youth and the years melted away.