More on Robins — The Messy Side

I usually think of robins as cheery birds, welcome harbingers of spring. But robins have a dark side, a behavior that would strike most human beings as insane, and one that presents a hazard to the robins themselves — window strikes.

Sometimes birds fly into windows because they simply don't see the glass. Either it appears transparent to them or they see the outdoors reflected in the glass and proceed to fly right into it. But in the case of the robin who began smashing into the glass window on the door that leads to my deck, the behavior almost certainly reflected an attempt to defend his territory.* His mate had recently built a nest under the deck, so his territorial instincts would have been aroused. Probably, the robin saw his own reflection in the glass and perceived it as an intruder robin, so he did what came naturally — he attacked.

The first time I heard the sound of something banging against the glass, I thought a bird had accidentally flown into it. But when repeated banging ensued, I concluded that some kind of territorial imperative was at work. Before long, I identified the culprit as a robin and realized his behavior might be linked to the nearby nest. I feared for the robin's safety. After all, how many whacks can a robin take without being injured or killed? In fact, multitudes of birds suffer injuries every year due to window strikes — some estimates put the number of North American birds killed in such collisions at between 100 million and 1 billion! 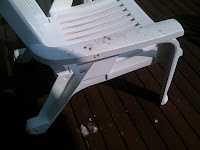 In addition to worrying about the robin's welfare, I also had to contend with the mess. The robin often perched on the edge of a white plastic deck chair near the door. He would leave his droppings on the chair and then inevitably step in them. Then, when the robin attacked the window, he left smeared white footprints all over the glass. The good news — the bird-brained creature apparently knew enough to hit the window feet-first rather than head-first. The bad news — the repeated assaults on my window left a heck of a mess, not to mention the bird droppings covering the chair and deck floor beneath it. 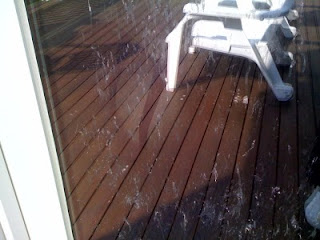 Since the baby robins left their nest two days ago, I haven't heard any banging on my door window. I'm hoping it's now safe to clean the window and hose down the chair and deck. And I'm happy to say the robin doesn't seem any the worse for wear — I saw him and his mate hopping around this morning in search of worms. I'm working on ways to eliminate the reflection from the window, so that in the future no robins will see imagined rivals reflected in the glass. Meanwhile, I plan to enjoy watching the birds who inhabit my backyard. Hopefully, they'll remain among the trees, grass, and flowers, where they belong.

*Apparently, both male and female robins exhibit this territorial behavior. Probably in this case the culprit was the male robin, since many of the window strikes occurred while the female was sitting on the eggs.
Posted by Barbara at 2:29 PM