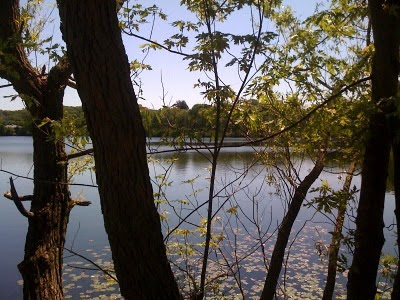 Now that I'm back in Newton, I've been enjoying the lovely spring foliage and the surprising variety of wildlife I can see right in my own backyard, including rabbits, red-tailed hawks, Baltimore orioles, a red fox, and a group of ungainly wild turkeys. Robins have become the dominant neighborhood bird and a couple has built their nest on a rafter under our deck. From the lower-level windows of my house, I can watch the open mouths of their little hatchlings as the robin parents feed them worms. But one thing I can't see from my backyard is water.

In Miami, my apartment overlooks Biscayne Bay. In Newton, I miss the water view, so when I go for a walk I often head for a local pond, river, or reservoir. Yesterday, a friend and I decided to take a stroll around Crystal Lake. The lake, known as Wiswall's Pond during colonial times, occupies 33 acres just a few blocks from bustling Newton Centre. During the 1880s, the lake was renamed Baptist Pond because the First Baptist Church of Newton used it for baptisms. Toward the end of the nineteenth century, ice dealers, who sold ice harvested from the lake for refrigeration, gave Crystal Lake its current name, believing it would appeal to customers. Today, houses surround most of the lake, but there's also a public swimming area. On one side of the lake, opposite the public beach, the "T" can be heard as it carries commuters to and from Boston.

I first saw Crystal Lake almost 30 years ago, before I'd even moved to Newton. My sister-in-law, who was then a Newton resident, invited me to join her there for a swim. She was seven months pregnant at the time and had been keeping fit during the summer by swimming in the cool lake waters. I spent a delightful afternoon with her. The beach was tiny, but the water was cold and clear. Perhaps too cold. Later that day, my sister-in-law went into labor and shortly after gave birth to a premature baby boy. All ended well, though — today, my nephew is a strapping young man.

Yesterday's walk around Crystal Lake was less eventful than that first swim, but still a lovely way to spend a spring morning. It had rained the previous day and the air smelled sweet with the scent of flowers. We ambled along the lake, past imposing homes with emerald-green lawns, until we arrived at the public area. The lake shimmered with, dare I say, a crystalline glow. As I stood admiring the lily pads, it occurred to me to take the photograph shown above with my iPhone (click on the photo to enlarge it), in the hope of capturing the moment.

For a much more complete history of Crystal Lake check out this 1911 Historical Sketch.