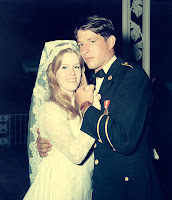 While Al Gore has been traveling around the world warning that the earth's climate is warming, there has apparently been a distinct cooling in the climate between him and his wife, Tipper — the couple revealed today that they are separating. The news came via an email sent this morning to friends and first reported by Politico.

"This is very much a mutual and mutually supportive decision that we have made together following a process of long and careful consideration," the former vice president and his wife said in their email. "We ask for respect for our privacy and that of our family, and we do not intend to comment further."

The news comes as a surprise to me, given that the couple has been known for their close and openly affectionate relationship. According to the L.A. Times, they recently spent $8.8 million dollars on a mansion in Montecito, California, not something I'd expect them to do if they were about to separate, unless the fancy new home with nine bathrooms represented a last-ditch attempt to save the marriage. While I was busy wondering how an environmentalist like Al Gore could purchase a property with such an enormous carbon footprint, I guess I should have been speculating about whether the Gore marital climate had gone glacial.

For their sakes, I hope the Gores adhere to their stated intention not comment further. It's really nobody's business why their marriage failed after forty years and four children. Still, it's amusing to speculate. Perhaps Al's expanding girth has been a source of tension. Or his constant travel as an environmental advocate. Or maybe Tipper craved the life of First Lady and never recovered from her husband's difficult defeat in the 2000 election. Or perhaps Al told Tipper that he's starting to doubt the global warming theory that he did so much to promote. Now, that could have provoked some pretty heated arguments!
Posted by Barbara at 6:21 PM