I love bananas. I like to eat them with my breakfast granola. I enjoy them as a late afternoon snack, which will stave off hunger pangs until dinner. I love banana bread, banana cream pie, banana splits. Mashed bananas were among the earliest food I fed my kids. But I've always had a problem with bananas — when stored at room temperature, they quickly become overripe.

I tend to like my bananas firm, when the skin has turned yellow but there's still a hint of green at the stem. I don't like them at the supposedly ideal stage (except if I'm baking banana bread), when they're yellow with a few flecks of brown. Until recently, I always hesitated to buy my bananas in large bunches, lest they rot before I had a chance to eat them, so I would buy one or, at most, two bananas at a time.

Then I heard an interview with Dan Koeppel about his book, Banana: The Fate of the Fruit That Changed the World. Toward the end of the interview, Koeppel sang the the Chiquita Banana song, one of the more successful advertising jingles in history. Among the original lyrics are the following assertions — "Bananas have to ripen in a certain way" and "You should never put bananas in the refrigerator."

According to Koeppel, both those assertions are false. In fact, bananas are shipped refrigerated, which keeps them from ripening too soon. Refrigerating them once you've purchased them will slow down further ripening. While the skin may turn brown in the refrigerator, this does not mean the bananas have gone bad. In fact, they will remain at pre-refrigeration ripeness for a much longer period than if left at room temperature.

This was all news to me. On rare occasions, I had previously put bananas in the refrigerator in the hope of preserving them. But the skins quickly turned an unappealing shade of brown and I just assumed the fruit had gone bad. My mistake. Since hearing the interview with Koeppel, I've been buying bananas by the bunch and refrigerating them once they reach exactly the stage of ripeness I prefer. In the refrigerator, they remain firm and delicious for a number of days. And they don't always turn brown (see the photo below, of a banana that's been refrigerated for several days and is still looking good). Plus, I've discovered I like the refreshing taste of a cold banana. 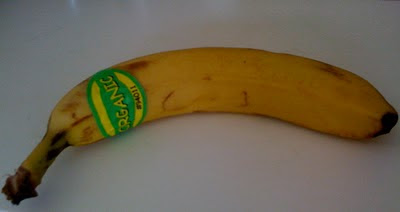 These days, my bananas are cool, both literally and figuratively.
Posted by Barbara at 1:45 PM