The Healing Power of Sports

I didn't think anything could pull me out of my despondent mood yesterday, but I inadvertently re-discovered a powerful antidote for despair — the shared euphoria that sometimes occurs during a sporting event. 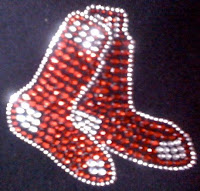 A friend had given E. and me tickets to last night's Red Sox game. While a long-time fan, I haven't been following the Sox closely this season and felt ambivalent about going, especially in light of my malaise over the drastic situations in the Gulf and in the Middle East. Still, it was a beautiful evening and we had the tickets. There was no good reason not to go. So, I put on my Red Sox glitter shirt and we headed over to Fenway.

As soon as we walked onto Yawkey Way, I felt better. The smell of Fenway Franks in the cool night air evoked memories of earlier happy visits to the ballpark and the sound of Boston accents gave me a comforting sense of place. Inside, we found our seats on the first base line and settled down to watch the pre-game festivities. The green grass glimmered, the white home uniforms shone, and the "Star Spangled Banner" rang out loud and clear.

The game got off to a fast start. Daisuke Matsuzaka allowed three Oakland runs in the top of the first inning. Then, in the bottom of the first, Oakland Pitcher Ben Sheets let Boston get two of them back. The score remained 3-2 until the bottom of the fifth. Darnell McDonald doubled to the gap in left. David Ortiz stepped up to the plate. Patiently, Big Papi worked the count to 3 balls, 2 strikes. He fouled off a fastball. The crowd was into it, cheering as Sheets threw his next pitch, an inside fastball, which Ortiz sent sailing gracefully into the seats in right field. 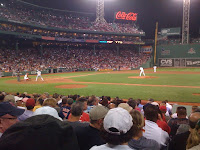 It was a moment of pure joy. Worldly concerns fell away as the fans roared their approval. It seemed to me that the crowd's anticipatory cheers had provided just the right impetus for Big Papi's bat. I exulted along with the rest of the fans, remembering why I love baseball so much. Later, during the seventh inning stretch, everyone joined in a rousing rendition of "Take Me Out to the Ballgame." The old-fashioned song, sung in the historic park, gave a further lift to my spirits, as did the fact that the Sox went on to win the game.

I later learned that while I was watching the Red Sox, Armando Galarraga was pitching a perfect game for the Detroit Tigers, marred only by a faulty call on a play that should have resulted in the final out. Frustrating as it was for Galarraga to be denied his perfect game, the umpire (once he saw the replay) couldn't have been more regretful and the pitcher couldn't have been more magnanimous — another example of the way sports can elevate us.

After 9/11, the power of sports to unite people and hearten them was demonstrated most dramatically when the Yankees played their first home game after the attacks, on September 25, 2001. Yankee Stadium became the setting where Americans could express their grief, their patriotism, and their solidarity. Last night, I was reminded of that remarkable ability of sports to bring people together.

Today, it's back to the real world, but with a little more optimism than yesterday.

Click on the photos to enlarge them.
Posted by Barbara at 11:49 AM