The Way Memories Bubble Up

This morning, I read a moving poem, written by a friend, Bonnie. The poem is set on on the Olympic Peninsula in Washington. I would re-print it here, but it has recently been accepted for publication, so I'll just say it describes two people camping by the Sol Duc River, preparing a meal over an open fire and singing songs from the sixties, the breeze wafting over them, time like a river lifting them and carrying them along.

My summary is totally inadequate—the power and beauty of the poem lies in its language and its associations, both internal and those evoked in the reader. For me, this poem awakened a memory from 40 years ago, from the summer of 1969, the same summer that man first walked on the moon, the summer of Woodstock, the summer that Ted Kennedy drove off a bridge in Chappaquiddick. As I read Bonnie's poem, I recalled a camping trip I took that summer.

Eric and I had dated during the winter and spring of '69, our sophomore year in college, but I had broken up with him just before school ended. Nevertheless, in mid-summer Eric called me from the West Coast to see if I'd like to join him and his friend, Hoyt, on a camping trip to the Olympic Peninsula. Hoyt's family owned a ranch in Sisters, Oregon, and Eric had been working with Hoyt building fences in the area. When the work ended, they decided to take a camping vacation in Washington. Eric apparently hoped to revive our relationship and called to see if I'd had a change of heart.

His timing was perfect. I had been going crazy living at home on Long Island and working at a summer job in the billing department of a Wall Street commodities firm. That summer, the Long Island Railroad was plagued by political turmoil and mechanical problems and the commute on the stifling train often took two or more hours. What's more, my job involved mind-numbing repetition. So when Eric called, I didn't hesitate to quit and hop on the next plane for Seattle, where Eric and Hoyt retrieved me in Hoyt's pickup truck. 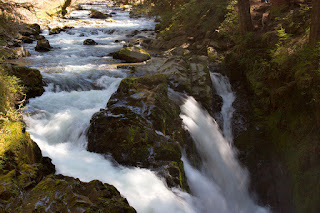 Sol Duc Falls on the Sol Duc River
After a gorgeous ferry ride from Seattle to the Olympic Peninsula, we drove along the path of a river until we found an inviting campsite. We left the truck by the road and brought our sleeping bags down to a gravel beach near the water. The air was fresh, the current strong, and my spirits were buoyed by my escape from New York. Eric seemed so happy to see me. I hoped we could make a go of it.

As the sun set, the air cooled, and Eric put on his puffy North Face parka. In a moment of exuberance, he began imitating Neil Armstrong in his spacesuit, taking giant robotic steps and intoning "One small step for man . . ."

Unfortunately, I was not amused. Looking back, Eric's clowning seems so sweet, so trusting, so funny. At the time, though, I found his behavior totally uncool, even embarrassing, especially in the presence of Hoyt, who seemed the embodiment of rugged machismo. Still, the stars were brilliant in the sky and the scent of Douglas firs perfumed the air. Maybe things would get better.

We explored the Peninsula for several days, walking among the giant rock formations on the beach, digging for clams, and hiking through the temperate rain forest. It was all spectacularly beautiful, the perfect setting for romance. Alas, I couldn't erase the image of Eric all puffed up, pretending to be an astronaut. By the time we had left Washington and arrived at Hoyt's ranch in Oregon, we were barely speaking, a situation that continued through our last two years of college. Things didn't change until a chance meeting early in 1972, when I was given a wonderful gift—the chance to rekindle our relationship. This time I didn't let any puffy parkas get in the way.

It's wonderful and mysterious, the way memories bubble up, evoked perhaps by a smell, a song, or a passage from a poem. Forty years ago suddenly seems like yesterday. Thanks, Bonnie, for allowing me to briefly return to that time and place.
Posted by Barbara at 11:53 AM