Remembrance of Times Past

Later today, I plan to visit my aunt and uncle, who live in a large condominium community about an hour north of Miami. My parents lived in the same community for a little over a year; they moved there from a house in Boca Raton, where they'd resided for over twenty years. Their apartment was small but pleasant, with two bedrooms and a screened terrace overlooking one of the community's many pools. My mother, a social person, always enjoyed watching activity from her window, so the poolside location was a good choice for her.

The apartment needed work, though. It's paint was old and dingy. The carpet, cheap to begin with, was threadbare and unattractive. The refrigerator needed replacing and the bathrooms were tired. When my parents moved in, my mother had every intention of fixing the place up. But she wasn't feeling well. She'd been diagnosed with an ulcer and had no appetite. She needed a knee replacement. And my father had early Alzheimer's, so required care and attention. They moved their furniture in and, after some prodding from the family, hung their artwork. The place was comfortable enough, if not perfect. The fix-up would come later.

But it never did. My mother's knee replacement left her in more pain than before the surgery. Though her ulcer seemed to have been cured, her appetite didn't return and she continued to lose weight. She went from doctor to doctor but found no relief. Eventually, she complained to one doctor of a swollen gland, which turned out to be an indication of metastatic cancer. By then, she was showing signs of mental deterioration. Only a few months after that, she died.

Almost until the end, my mother hoped and even expected that she would get better, that she would paint and re-carpet the apartment, and that she would build a nice life in the community. It was perhaps a blessing that her mental state declined in such a way that she never fully grasped her diagnosis. Fortunately, her passing was swift and, during her last days, without pain.

After she died last June, my father relocated to Chicago, where my two sisters and several nieces live. After family members removed the important keepsakes, we put the apartment up for sale, fully furnished. And there it has sat. The real estate market is terrible. Nothing is selling in the community, or in most of South Florida, for that matter.

The last time we visited my aunt and uncle, Eric and I checked my parents' apartment for the first time since returning to Florida from Boston. The realtor had informed us of a stain caused by a small leak, so we brought a can of paint with us. While Eric painted, I dusted and swept. It was an eerie, unsettling experience to be back there, yet not find my mother sitting at her accustomed spot in front of the computer nor my father out on the terrace, watching a football game on tv.

We've since lowered the price of the apartment, hoping against hope to sell it quickly. Yesterday, the realtor emailed us to say there's another leak. We'll stop by to check it out this afternoon. I anticipate that seeing the apartment, which seems to be slowly deteriorating, will remind me painfully of my mother's slow decline during the last year of her life. In retrospect, I wonder how I could have missed the signs of her serious illness. She had always been so strong. I convinced myself she would recover and keep on going.

During my weekly Sunday visits with my parents, the best times occurred when I persuaded my mother to come outside by the pool and sit with me under the shade of an umbrella, enjoying the soft Florida breeze. There, she would invariably feel better and often would reminisce about happier days—her childhood in Washington Heights, the many wonderful trips she and my father took, the fun times she had with her family and her many friends.

I think I'll spend a few moments by the pool this afternoon, where my mother remembered the good life she had. 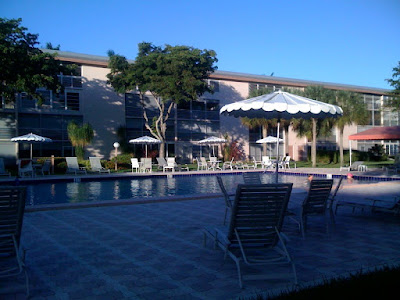