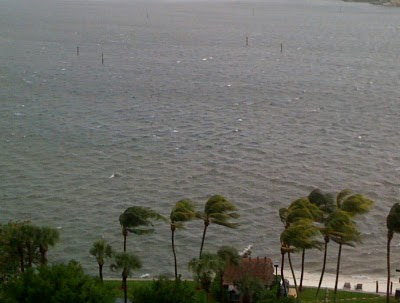 Miami has just experienced a rain blizzard. At times, the rain fell so furiously I couldn't see anything in front of me and the wind roared so fiercely I feared a tornado would strike (in fact, a small tornado is believed to have touched down not far from here). The rain has stopped, but the palm fronds are still blowing horizontally and white caps have formed on normally quiet Biscayne Bay. Over a foot of rain has fallen here since yesterday. The wild Miami weather is part of the same system that's about to wreak havoc on Virginia, Washington D.C., and points further north, where forecasters predict a major snowstorm.

There's been a lot of wild weather this week. Over five feet of snow fell during a single extended storm in Valdez, Alaska, setting a record. In Edmonton, Canada, cold records were shattered on Sunday when the temperature sank to -46.1 degrees Centigrade. That's Centigrade. Shockingly cold. For those who believe in global warming, any extreme weather provides evidence that we're destroying our climate, so presumably even record-setting snow and cold proves that the earth is warming. Call me an agnostic, but I'm still not convinced, especially after the recent scandal regarding suppression of data that didn't support the global warming hypothesis. And then there's the question of sunspots (see "Global Cooling")—a sunspot minimum might not negate the greenhouse gas theory but it could ameliorate its effects.

Ironically, it snowed this week in Denmark and the country is expecting a white Christmas for the first time in 14 years, while world leaders meeting there debate solutions to global warming. Not that news commentators mentioned the snow. Nor should they have—individual weather events do not in and of themselves prove or disprove the theory of global warming. Still, had the temperature soared to unexpected highs in Denmark this week rather than sinking to unaccustomed lows, I feel pretty sure journalists would have woven the local weather into their updates from Copenhagen.

Some may call me a Polyanna and perhaps it's true that I'm in denial. I fervently hope that the earth won't overheat catastrophically, so maybe I'm grasping at any sign that the science supporting global warming is wrong. Yet some scientists do dispute the prevailing view. For example, see "The Climate Science Isn't Settled," a recent op-ed in the Wall Street Journal, by MIT professor of meteorology Richard S. Lindzen.

For now, I'll take things a day at a time. Many of the measures proposed to prevent global warming seem good for the environment, so I'll support them. But I'll view attempts at excessive government intervention and spending with a wary eye. The deluge appears to be over for the moment in Miami, but the political storms swirling around the issue of global warming seem likely to continue for a long while. 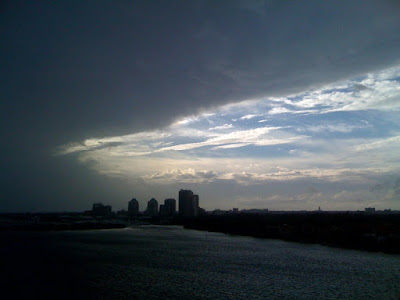