SoFi, and I Don't Mean Sophie

It's a gloriously sunny day in South Florida and I've been dying to visit South Beach's South Pointe Park, a 17.5-acre esplanade which recently underwent a $22 million renovation. That's a lot of money to spend in any economy, let alone this one. I'm eager to take advantage of the largess. 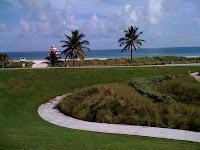 The esplanade creates a link for walkers from the inland waterway to the Atlantic Ocean. It fronts on the Government Cut, a man-made shipping channel that was literally cut across the end of the Miami Beach peninsula a century ago, creating Fisher Island to its south.

South Beach comprises the 23 southernmost blocks of Miami Beach. In recent years, the southern tip of South Beach, which lies south of Fifth Street, has become known as SoFi. To the north of Fifth, the crowds on Ocean Drive party day and night; to the south, it's quieter and, with the addition of newly-planted dune grass and palms along the esplanade, breathtakingly beautiful.

It's hot today, too hot for a long walk, but perfect for an amble through the park and onto the beach. Along the way, I pass a fashion shoot in progress. What better spot to photograph a rakish model in casually stylish attire? 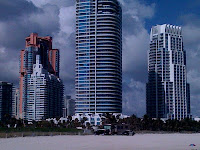 Whichever way I look, the views are stupendous—the Port of Miami and the Miami skyline to my west, the brilliant white sand curving north along South Beach, and behind me to the northwest, luxury high rises hovering over the water like cruise ships in dry dock. 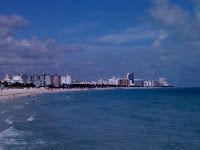 There's great food to be had in SoFi. Today, I enjoyed lunch at a restaurant adjacent to the new park, overlooking the Government Cut. As I ate, I watched a giant container ship sail by, almost close enough to touch, no doubt on its way to some exotic destination. As for me, I felt quite happy staying put. In ultra-chic SoFi, I'd already found my exotic destination.