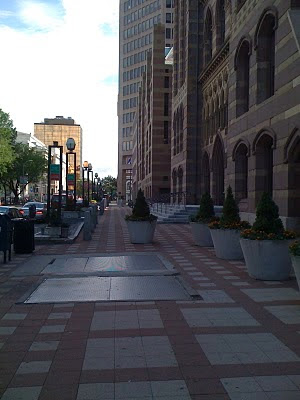 To me, New Haven has always been synonymous with Yale. In the 1970s, when we lived in Middletown, Connecticut, E. and I occasionally visited a friend who was studying musicology there. I remember that the campus was gothic and there was a place that had great milk shakes. That's about all.

In 2002, E. and I traveled to Yale with our son, Alex. We exited the freeway, drove a few blocks, parked, then gathered with other parents and their kids at the Admissions Office for a college tour. I mostly recall anxious students asking questions about AP credit. After the tour, we left as quickly as we'd come, not even pausing for a snack. 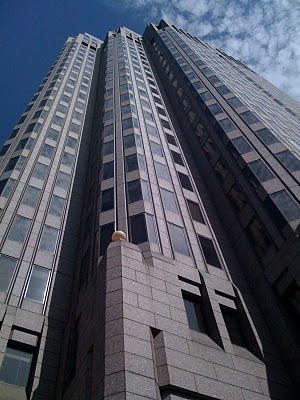 I don't recall seeing a downtown back then, but there is one, complete with skyscrapers, as I discovered this weekend while visiting my older son, Aaron, who's working in New Haven this summer. In fact, Aaron works in the Connecticut Financial Center, the tallest building in the city. The Financial Center, with its powerful verticality, stands in contrast to its next-door neighbor—City Hall, a beautifully restored old edifice augmented by a new wing. 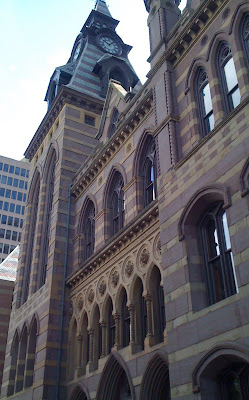 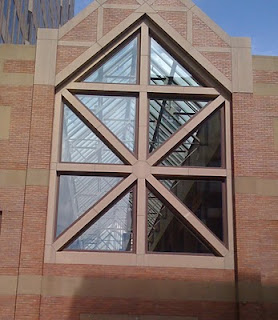 The government and business district is adjacent to the New Haven Green, a historic common area located in the center of downtown. According to the Wikipedia entry on New Haven:

The Green is a traditional town green (commons) and was originally known as "the marketplace." It was completed in 1638. The Puritans were said to have designed the green large enough to hold the number of people who they believed would be spared in the Second Coming of Christ: 100,000. 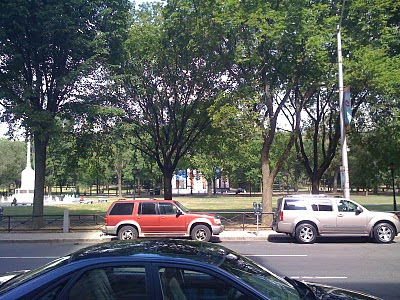 Across the Green lies Yale's 260-acre central campus, so while government workers, businessmen, lawyers, and bankers engage in municipal and commercial activities, the university always looms in the background. While Yale may not exactly be considered New Haven's savior, improved town-gown relations, initiated by Yale President Rick Levin, have been beneficial to the larger community, with Yale providing financial support for a number of New Haven's redevelopment efforts. 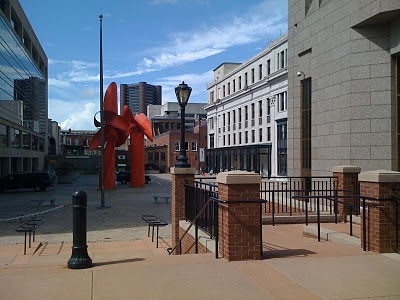 During our visit, we ate dinner at a terrific restaurant, the Union League Cafe, sampled ice cream at Ashley's, near the Yale campus, and explored the downtown area. 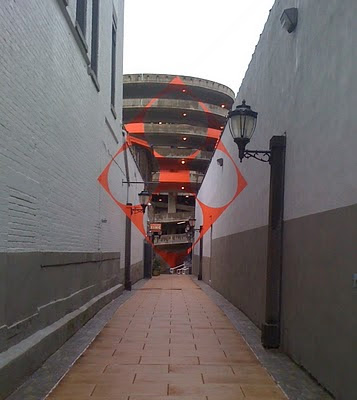 We didn't entirely neglect Yale, however. Our visit to New Haven wouldn't have been complete without a pilgrimage to the statue of Nathan Hale in front of Connecticut Hall on the Yale campus. Hale, who has been designated the state hero of Connecticut, graduated with first-class honors from Yale College in 1773. 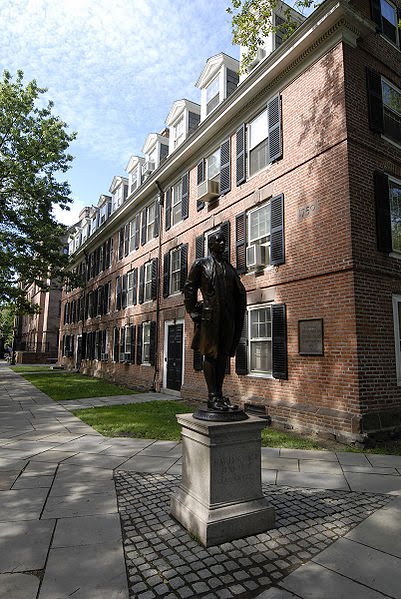 Click on the photos to enlarge them.
Posted by Barbara at 2:31 PM