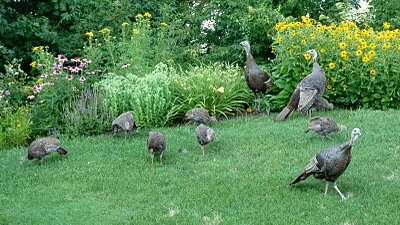 Really, the same old turkeys as those featured in my blog post of a few days ago, but seen in a different photographic light. I've finally figured out how to use my new point-and-shoot digital camera. 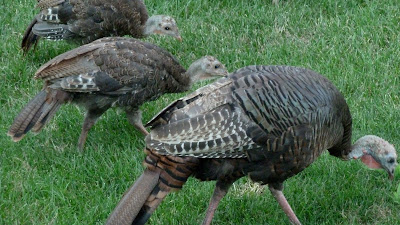 These are the very first photos I've taken using the camera's zoom feature. The entire point of a point-and-shoot is that it's extremely easy to use. Nonetheless, it took me a couple of days and intense scrutiny of the almost-inscrutable operating instructions before I could manage to insert the battery, set the clock, and understand the various shooting options. Finally, I took my first picture, then realized that the camera's internal memory had only enough memory for one picture and I hadn't yet purchased a memory card. That finally arrived yesterday, so I was able to take the pictures featured here. 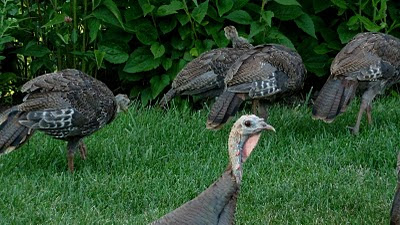 Fortunately, the turkeys have continued their afternoon visitations to my backyard, so that gave me another opportunity to photograph them. Although these pictures were taken using a zoom, the turkeys were well aware of my presence on my deck, not far from them. Notice that they aren't running away. While the adults do appear alert, they don't manifest any fear. They seem to regard me as their nosy neighbor. So long as they don't trample my flowers or take up residence on my deck, I'm okay with that. 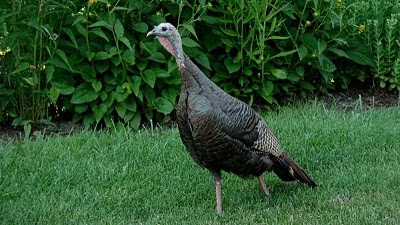 I clearly have some work to do on composition and camera steadiness before I can claim mastery of my new Panasonic Lumix DMC-ZS7. But by the time that occurs the baby turkeys will probably be full-grown. So following the dictum of carpe diem, I hereby humbly submit the latest chapter of my turkey chronicles.