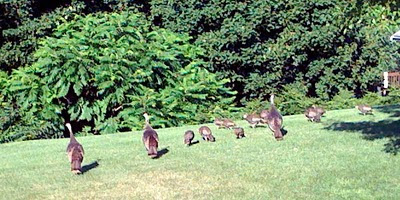 I've declared my yard a turkey-friendly zone. The wild turkeys that live in my neighborhood must have sensed that because not only have they been fruitful and multiplied, but they've taken to strolling through the yard on a regular basis. 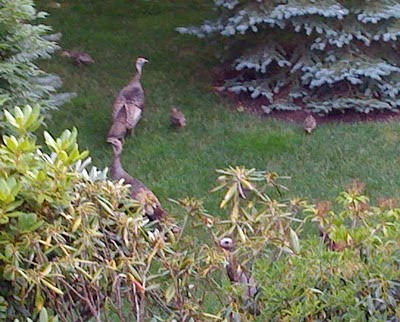 Ungainly though turkeys may be, their little offspring couldn't be cuter. What is it about babies of almost any species that make them so endearing? (Not counting insects, of course. Seeing multitudes of baby insects can only be described as disturbing.) The other day, one of the young birds wandered a bit far away from its siblings. I got rather close, trying to take a picture with my iPhone. Guess what? Baby turkeys can fly! Not so sure about their enormous parents, though. 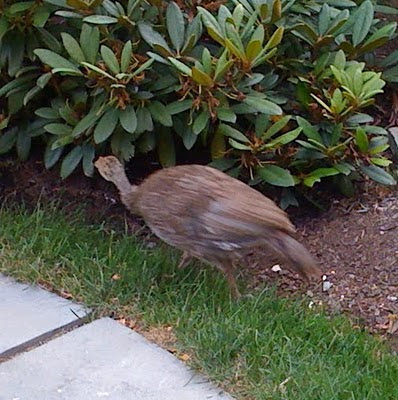 I do love seeing the turkeys near my house, but sometimes they get a bit too close for comfort. When the adult bird in the photo below began to explore under my deck, I decided to shoo it away—large birds produce large droppings and I didn't really want to have that amid the gravel. But I didn't get too close while entreating the bird to leave. I've heard a story or two about turkeys attacking people and, with the bird's children right around the corner, I thought it might be in a protective mode. Fortunately, as I approached, the turkey fled in the direction of its family. 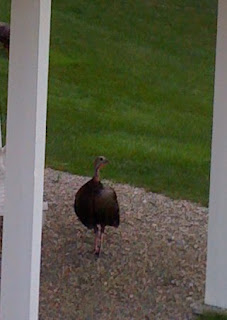 I have to call the turkey "it" because I haven't a clue about its gender. How do you tell a male from a female turkey? Another conundrum for the uninitiated bird watcher. I can report, though, that a total of twelve babies have been accompanied during the past few weeks by three very watchful adults. 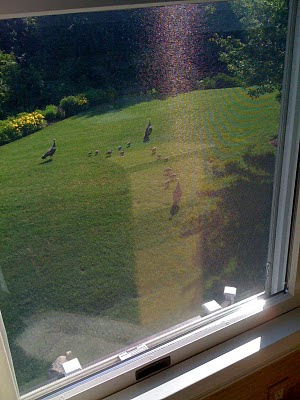 Much as I've been delighted by the large brood populating my yard in recent days, I'm hopeful that some of them will eventually fly off to other neighborhoods. I would be no match for fifteen adult turkeys. And my little toy poodle, Cosmo, would be completely beside himself.

Click on the photos to enlarge them.
Posted by Barbara at 6:15 PM