Today was a rare, perhaps unique, day in American meteorological history. Snow was on the ground in 49 of the 50 states of the union. Only Hawaii had no snow, but Florida's panhandle got some of the white stuff, thanks to an unusual winter storm making its way across the South. With the mid-Atlantic and Northeast digging out from the latest blizzard, the United States is officially a winter wonderland. Too bad Vancouver hasn't shared in the snowfest—as the Winter Olympics begins, workers are busy trucking in snow and hoping it won't melt before the ski events begin tomorrow. 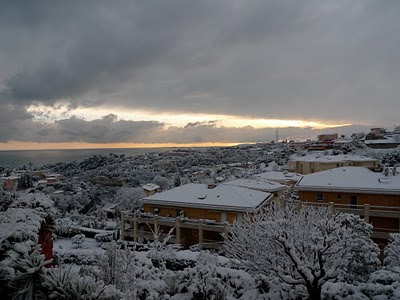 But the U.S. is not the only country experiencing more snow than usual. My cousin Cathie sent me the beautiful photograph posted here. It was taken yesterday at sunset by her husband, Jacques, from their apartment in Nice, France. It also snowed today in Rome—the heaviest snowfall in nearly a quarter of a century.

Even here in normally balmy South Florida, the weather has been uncharacteristically wintry. Many plants died during the January cold snap, along with fish who couldn't withstand the colder waters (see "Death at Sea").

This week, we're having cold-snap redux. Yesterday, I awoke to temps in the low forties and crisp dry air, kind of like fall in New England. Today was a bit warmer, but still unusually cool. During the late afternoon, dark clouds began to gather, but they didn't appear overly ominous. After darkness fell, however, I saw flashes of lightning in the distance. I didn't think much of it until, from one second to the next, a violent wind began to blow, so fierce that I stopped what I was doing and moved away from the window, wondering if a tornado was about to descend. Instead a powerful thunderstorm unleashed its lightning, thunder, and rain upon us.

Who knows what will come next? Given the wild weather across the nation, nothing would surprise me. Snow for Mardi Gras? A white Valentine's Day in Miami? How about an early spring for everyone? Now that would be a surprise.

Click on photo to enlarge.
Posted by Barbara at 8:14 PM