The Curious Case of the Moving Mattress

A few years ago, E. and I discovered the joys of a Sleep Number mattress by Select Comfort. We had tried conventional mattresses of varying firmness, including a pillow-top mattress that was soft on top and firm underneath. Nothing felt good for long. Plus, we didn't exactly agree on the desired firmness. I like a nice cushy feel, while E. hates to sink in. Our solution—a Sleep Number air mattress with separate adjustments for each side. 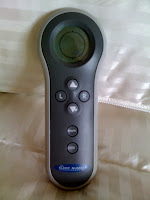 E. sets his side at 90 out of a possible 100, almost as firm as can be. I prefer to vary the air level, going as low as 25 and as high as 70. In fact, I particularly enjoy the ability to change the setting. If I find that I'm feeling at all stiff or sore in the morning at a firmer setting, I can soften the mattress and relieve any pressure points. If the softness starts to irritate my back, I can increase the firmness for a while. We've been very pleased with our sleep solution. Until lately, that is, when our mattress seems to have developed a mind of its own.

Last week, I was sitting on the love seat in our bedroom, watching television, when suddenly I heard the tell-tale release of air characteristic of the mattress resetting from a higher to lower setting. But I wasn't trying to reset the bed. The setting remote was tucked away in E.'s nightstand drawer. After a couple of minutes, the bed clicked on again. This time, it sounded as if the bed were refilling with air. Peculiar, to say the least. Still, when I climbed into bed later and checked the setting (I normally set the firmness while lying on the mattress), it seemed to be more or less where I'd left it. As with other mysterious occurrences, since I couldn't figure out why it had happened, I conveniently forgot about it.

Last night, however, the bed once again spontaneously turned itself on, several times. This time E. was sitting next to me and witnessed the strange event. Again, the setting seemed okay when I later got into bed and checked it. But what could be causing the bed to develop a mind of its own?

We hadn't had any power surges. I hadn't touched the plug. My nightstand sits between the love seat and the bed, but the setting remote was way on the other side of the bed, in E.'s nightstand drawer. However, several other remotes were on top of my nightstand—television, cable, and radio. Could their proximity somehow have signaled the bed to re-adjust itself? I wasn't using the remotes when these events occurred, although I was watching television each time.

Then there's the apartment factor. Perhaps, unbeknownst to me, the man who resides in the apartment next door also has a Sleep Number mattress and, while adjusting his, triggered ours. Or the people upstairs have an Xbox that's interfering with our mattress. Or it's sunspots. At least the problem doesn't seem to occur while we're sleeping. Not yet, anyway.
Posted by Barbara at 12:43 PM