Ode to the Brown Pelican 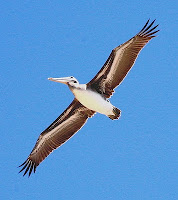 I have been living by Biscayne Bay in Florida for over five years, yet I never tire of seeing brown pelicans in flight. They look like creatures from prehistoric times. Indeed, the fossil record indicates that pelicans have existed for over 40 million years. I'm repeatedly filled with awe at the sight of their impressive wingspans and long beaks. Perhaps if I'd grown up in a climate where pelicans were common, I would regard them as an everyday sort of bird. Instead, I never fail to find them amazing.

Pelicans appear at times comical, at other times majestic. I love to watch groups of them flying overhead in a vee formation. Often, though, a single pelican, gliding above the water, catches my attention. A pelican's dive is something to behold—from a considerable height, the bird plunges head-first into the water, scooping up fish in the distinctive pouch under its beak.

Brown pelicans, like other sea birds, were devastated by DDT and were placed on the endangered species list, but recent years have seen a recovery of the their population and they have been removed from the list. I count myself lucky to live among them. I hope there will never be a time when brown pelicans won't fish in the waters of Biscayne Bay.

Photo courtesy of Wikimedia Commons. Click on photo to enlarge.
Posted by Barbara at 6:00 PM