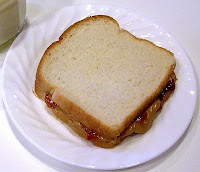 Today, I had a peanut butter and jam sandwich for lunch. It's still a favorite of mine, although too much sweet jam sometimes induces an afternoon headache, so I indulge sparingly. A few other aspects of the meal have altered, too. Charting the evolution of my PB&J lunch provides a revealing look at the way American eating habits have changed.

When I was very young , my mother made my PB&J sandwich with Wonderbread, creamy-style Skippy Peanut Butter and Welch's Grape Jelly. By the time I reached my teens, I'd discovered black raspberry jam and my mother had switched from Wonderbread to Pepperidge Farm white bread. Back then, my idea of a good sandwich consisted of a thin spread of peanut butter and gobs of sweet, luscious jam. I still favored creamy-style peanut butter and my mother still purchased the Skippy brand.

For a good part of my life, I considered a PB&J sandwich inedible without an accompanying glass of milk. By milk, I meant whole milk. Though I learned to tolerate low-fat and later non-fat milk in my cereal, I preferred to drink good, old-fashioned whole milk when imbibing straight from a glass. Usually, my glass of milk contained an added dollop—a couple of teaspoons of coffee. My father was in the coffee business and I considered it a great privilege to be allowed to add a spoonful or two of coffee to my glass of milk, years before I was permitted to drink coffee on a regular basis.

PB&J was a staple food of my college years. While I usually had no idea what brands of bread, peanut butter, and jelly or jam the dining hall served, I still often preferred PB&J to the mystery meat alternative. Toward the end of my time in college, the back-to-the-land movement had taken off, along with an interest in healthier eating. Some of my friends tried growing their own food; others experimented with macrobiotics. While I didn't radically change my eating habits, some of the new food ethos rubbed off on me.

By the time I graduated from college, I preferred my PB&J with whole wheat bread. Later, natural fruit spreads took the place of jams made with refined sugar. Eventually, unsweetened, all-natural peanut butter became readily available. I still clung to my whole milk, though, until finally the ubiquitous concerns about high cholesterol wore me down. Not that I had high cholesterol, but it seemed somehow indecent to continue consuming such large quantities of animal fat, as if I were tempting fate. I still disliked the taste of straight skim milk, even with a little added coffee, so I would often reverse the proportions and accompany my sandwich with a cup of coffee to which a little skim milk had been added.

Today, I prepared my PB&J using an excellent whole grain bread, spread with a generous portion of all-natural peanut butter (kept refrigerated to prevent the oil from separating out) and a thin glaze of apricot fruit spread. I enjoyed the sandwich with a glass of Brita-filtered tap water and a P.D. James mystery. That's one thing that hasn't changed—PB&J always tastes better while reading a good book.
Posted by Barbara at 2:15 PM