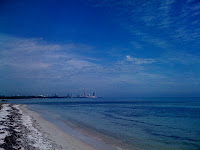 I spent this morning walking through the mangroves on Key Biscayne until I reached a deserted beach with gorgeous views of Miami. I was accompanied by friends who had just returned from a trip to Peru, where their explorations ranged from the Amazon rain forest to the mountainous region of Machu Picchu. At Machu Picchu and in the nearby Incan city of Cuzco, the main hazard they faced was altitude sickness. But in the rain forest, the danger came from snakes.

There are a number of venomous snakes in the Peruvian rain forest, but according to my friends' guide, the most virulent among them is the bushmaster, the largest pit viper in the world. The guide said that a bite from a bushmaster would result in almost instant death. In fact, he said, his father had died from such a bite.

Picture yourself walking through the rain forest, having such a conversation. Would you feel a tad anxious? Then imagine how you might react if you asked the guide how the bushmaster attacks its victims and he told you, as he told my friends, that it strikes from a tree limb above as the victim passes underneath. The guide joked to our friends, "That's why I always go first." Small comfort.

I'm not normally fearful of snakes. I've held non-venomous snakes and enjoyed their cool dry skin as they twined themselves around my arm. Like most people, though, I have a healthy respect for poisonous snakes. But the bushmaster seems to be in a league of its own—striking without warning, its bite almost invariably fatal.

Bushmasters have become increasingly rare as their habitat shrinks. My friends saw nary a poisonous snake during their time in the Amazon, let alone a bushmaster. They enjoyed their rain forest experience immensely. I found it fascinating to hear about and I'm looking forward to seeing their photos. But that's about as close as I want to get to Peru's rain forest. Worrier that I am, if a snake didn't get me I'd probably keel over from anxiety alone.

The bushmaster is now high on my list of reptiles to avoid. Closer to home, of course, I worry about alligators. As we made our way back from the beach alongside the wetlands where the mangroves grow, I kept an eye out for any hungry gators that might be lurking nearby. At least they don't hang out in trees.
Posted by Barbara at 3:49 PM