It was a glorious mid-April Miami day. The air was soft and warm under a baby-blue sky. My sister was in town for a visit, so I decided to take her to lunch at The Standard hotel, which has an outdoor grill overlooking the inland waterway between Miami Beach and the mainland. We were seated right next to the water, under a yellow umbrella. 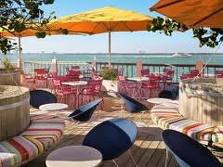 While waiting for our order, we watched a group of kids engaged in stand up paddle surfing just off the deck where we sat. Suddenly, only a few feet from one of the paddlers, a large ray leaped out of the water. Although the leap lasted only a second, I noticed that the ray had white spots all over its upper side. I'd never seen anything like it.

A few days ago, while walking along the seawall by my apartment building, I saw a ray with the same striking white spots as the one that had amazed me with its splashy leap a week or so earlier. 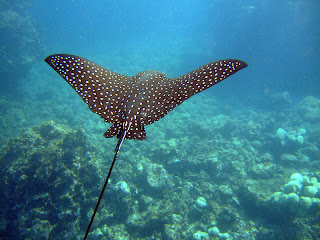 The ray was swimming in shallow water at a leisurely pace. I strolled alongside it for quite a while as it meandered inches above the sandy bottom. In addition to its spots, the shape of the ray surprised me—it had a distinct head. 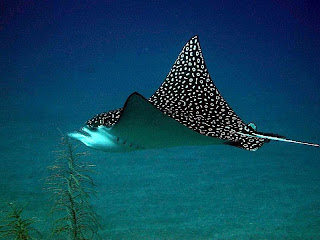 The southern stingrays I had previously seen in those waters didn't have defined heads, but rather a bulge with eyes in the center of their otherwise flat bodies. Here's a picture of a southern stingray, for comparison. 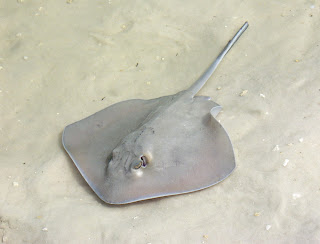 While walking along the seawall, only a few feet from the spotted ray, I recalled an incident I'd heard about a few years ago, when a woman died after a ray leaped onto her boat in the waters off Florida. Having seen one of those spotted rays leap for myself, I knew how suddenly it could happen. I inched away from the seawall. Did I worry that the ray would leap out of the water and land on me? Well, just a little.

When I returned to my apartment, I did some research. I learned that the ray I'd seen was a spotted eagle ray. The spotted eagle apparently leaps out of the water when pursued. It was indeed the type of ray whose leap resulted in a collision with a woman in a boat in 2008, causing her death (the ray also died). The boat was traveling 25 miles per hour at the moment when the ray emerged from the water. There was no sign that the woman was stung by the ray. Rather, her death was caused by the impact. Spotted eagle rays can attain a length of six feet or more from wing tip to wing tip and can weigh as much as five hundred pounds.

A similar boat incident had a happier ending last month, when another spotted eagle ray leaped and wound up on a boat.


In the short time since I saw the spotted eagle ray up close during my walk along the seawall, I've witnessed two more leaping spotted eagles, this time in Biscayne Bay. While they weren't as close to me as the one I saw at The Standard, the rays looked enormous as they erupted from the water with tremendous force. In fact, their leaps were so amazing that I almost forgot to worry about the people sailing nearby on their little sunfishes.


Photographs of rays courtesy of Wikipedia. Click on the photos to enlarge them.

If you receive this blog via email, you will have missed the two YouTube videos embedded here. Just go to the actual blog (http://whatmeworryblog.blogspot.com/2011/04/leaping-lizards-nope-leaping-rays.html) to see them.
Posted by Barbara at 3:23 PM