My duck experiment didn't involve birds in a lab or even the scientific method. It involved two wild Muscovy ducks who voluntarily resided on the grounds of my Miami apartment complex.

The pair apparently arrived at my Miami doorstep during my summer and fall sojourn in Boston. I first became acquainted with the duck duo when I returned to Miami in early December. By then, they appeared happily ensconced in their daily duck routine.

Mucovies don't swim much, but I would occasionally see them taking a dip in Biscayne Bay. They seemed to find much to enjoy on the grassy knoll between the complex's parking lot and the bay, including chomping on the grass with enthusiasm. They took advantage of water provided for them by an extension to the water fountain located in a little tiki hut adjacent to the parking lot. And they spent many hours preening their feathers. Toward the end of their busy day, I'd often find them resting next to one another on the sea wall overlooking the bay. 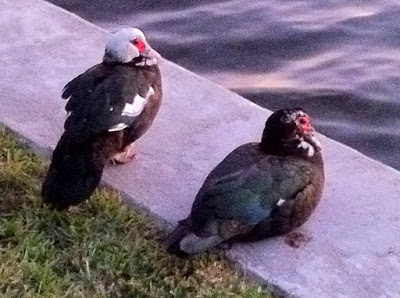 As you can see from the photo, Muscovies are not the most beautiful of ducks. They lack the elegant markings of mallards or wood ducks and their red caruncles may be regarded as downright unsightly. Perhaps familiarity breeds affection, though. It certainly has for me. I've come to find the very ungainliness of the Muscovies appealing. And after I initiated my duck experiment, I positively fell in love with them.

I wondered whether the ducks would respond to friendliness even in the absence of food. Other residents fed the ducks breadcrumbs. I would refrain. Instead, every time I saw the ducks, I would greet them effusively. I hypothesized that they would come to recognize and respond to me. Thus, my experiment began.

"Hi duckies," I would call, in that high-pitched voice often used for babies and pets. "Hi ducky, ducky, ducks." Sometimes they'd look up and even waggle their tail feathers. For a long time, however, I couldn't tell whether they recognized me, let alone whether they cared.

After a while, though, the ducks started walking in my direction when I called to them. A neighbor who heard my antic greeting and saw the ducks respond opined that hope springs eternal in the Muscovy duck. "Even if you haven't fed them before, they keep hoping," he declared. While secretly fearing he might be right, I continued to visit and greet the ducks. And eventually I was rewarded—the ducks began to come over to me even before I called to them. I felt sure this was a sign that they recognized me as a friend. But I couldn't be certain.

Then one day a breakthrough occurred. I was walking across the parking lot. Another woman and her young daughter were walking near me at the same time. Suddenly, both ducks made a bee-line for me from across the asphalt, heading toward me at a hilariously rapid web-footed run. I greeted them effusively. They came right up next to me, waggled their tail feathers and lingered for a few moments before heading at a more stately pace back to their grassy knoll. They totally ignored the little girl and her mother, even when the girl called to them. I felt sure they really had recognized and responded to me.

At that moment, the ducks became "my" ducks. I may have lost all scientific objectivity as an experimenter, but I had gained a pair of duck friends.