Where to Buy Drugs

I've found a great place to buy drugs — legal ones, that is. In most locales, there aren't many choices when it comes to drugstores — Walgreens, CVS, or maybe Rite Aid. Recently, New York City's ubiquitous Duane Reade chain was acquired by Walgreens, so New Yorkers now have one less option. As for the independent pharmacies, most of them are gone. Yesterday, though, I discovered a pharmacy that's trying to carve out its own niche.

I hadn't been looking for a new place to fill prescriptions or buy toiletries. I assumed that when I needed those items, I'd go to Walgreens or CVS. In some ways, the pervasiveness of the major chains is comforting. It's easy to transfer prescriptions, a big plus for me since I travel back and forth between Massachusetts and Florida. Also, I know what's available and where to find things in the chain stores, since most of them are laid out the same way no matter where they're located. And if there's something I can't find in either Walgreens or CVS, I go to my trusty backups — drugstore.com for a vast selection of drugstore products; and Whole Foods or the Vitamin Shoppe for supplements.

I still remember when there were many independent drugstores. Thayer's Pharmacy was a mainstay for years in Newton Centre, Massachusetts. I filled my prescriptions there and knew the people who worked behind the counter. It was taken over by CVS a long time ago, part of a consolidation that occurred all over the country.

There's one service not performed by the drugstore giants, though — compounding, which involves custom preparation of drugs to satisfy individual needs. Yesterday, my vet prescribed a medication for Cosmo and told me I should pick it up at Coconut Grove Pharmacy. It would be formulated specifically for him.

I asked the vet where the pharmacy was located. It turns out I'd been driving by it almost every day without noticing. Since it hadn't caught my eye, I wasn't expecting much, maybe a tiny retail space with a few new-age-y items and a low-tech setup for compounding. I was totally and pleasantly surprised to find a bright, modern, roomy interior. A quick perusal of the shelves revealed many of the products I usually buy at Walgreens, like Crest Toothpaste and Advil, plus supplements I'd normally find at Whole Foods. The store also sells an array of organic skin care products, with available testers that contribute a lovely scent to the air. The lighting fixtures are attractive and the shelves have wood accents, giving the space a warmth utterly lacking in the utilitarian expanses of the big chains. 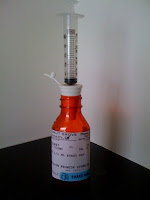 I found the owner-pharmacist personable and knowledgeable. He made up Cosmo's elixir using beef flavor, as prescribed by the vet. Along with the medicine, he gave me a good-quality syringe and a nifty device to allow me to measure the dose precisely. We chatted and I soon learned that not only does he offer a full-service pharmacy, with the entire array of prescription drugs sold by the chains, but he also accepts insurance. And he delivers!

How had I missed this place? It opened in January, 2009. I'm not known for my keen powers of observation, but apparently I also ignored several postcards sent to all the residents of my apartment complex, describing the pharmacy and the free delivery service. Better late than never, though. I'm pleased to have discovered an appealing alternative to the big chains. Not that I'll never go to Walgreens again — they have a product selection that the smaller Coconut Grove Pharmacy can't possibly match. But hopefully, there's room in the world for a small local establishment with specialized services alongside the bigger, more impersonal chain stores.
Posted by Barbara at 3:38 PM