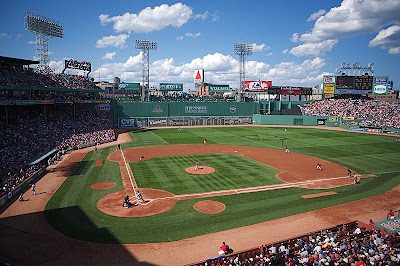 It's Opening Day at Fenway Park, with a twist. Day will turn to night by the time the game starts, and it will be the first home opener played on Easter Sunday. What's also a little twisted is that the Red Sox will face the New York Yankees right off the bat (pun intended). Happily, the game will be aired on ESPN, so I can watch it from Miami. I'll miss being on hand for the annual flyover of F-16s, though. My Boston-area house is right in the path of the flyover and it's always a thrill to hear the roar of the jets and run outside to see them pass overhead seconds before they fly over Fenway.

Like most Red Sox fans, I wax a bit sentimental on Opening Day. Today, I found myself thinking about the most thrilling game I ever witnessed at Fenway. It was April 27, 2002. The Red Sox were playing Tampa Bay on a beautiful spring afternoon. E. and I had seats along the third base line. The crowd seemed cheerful. It was early in the season and hopes ran high, even though the Sox hadn't won a World Series since 1918.

As always when I'm at Fenway, I wasn't paying too much attention to the game. I love the feeling of being at the ballpark—the green grass, the smell of beer and peanuts, the camaraderie of the fans, the satisfying sound when the bat connects with the ball. I noticed a young father sitting in the row behind me with his son, who was perhaps four years old and apparently at his very first game, judging from his father's patient attempts to explain the rules and point out the players. Although it was only around 60 degrees, the brilliant sunshine made it feel more like 80. I drifted along in a stupor of enjoyment as the game proceeded.

Somewhere around the sixth inning, it dawned on me that the Devil Rays hadn't gotten a hit off the pitcher, Derek Lowe. I glanced around. Apparently, it had dawned on everyone else as well. The crowd watched intently, but no one mentioned the phrase "no hitter." For suspicious fans, me included, that could have jinxed the whole thing.

By the bottom of the seventh, the crowd had a hushed, expectant air, punctuated only by the roar that accompanied every out. Everyone was riveted on the game. As Lowe came to the mound in the bottom of the eighth, I heard the father behind me urgently whisper to his four year old, who was getting fidgety, "Something really special might happen here. Let's be quiet and watch." The little boy, wide-eyed, didn't have a clue what his father meant, but he picked up on the importance of the moment and settled down.

Red Sox fans are notoriously loyal and devoted. Most stick around for the whole nine innings. During playoff games and certainly World Series contests, no one leaves. I haven't yet been at Fenway for one of those. But on the day of Derek Lowe's no-hitter, not a single person left the stadium. The anxiety was palpable as each of the ninth inning's three batters stepped up to the plate. When second baseman Rey Sanchez made the final out, pandemonium broke out in the stands. What started as an idyllic afternoon at the old ballpark turned into a jubilant celebration of one of baseball's most acclaimed accomplishments.

I'm psyched for the new season and hope to make it to Fenway for a game or two. I know there's always a chance that while I'm there, something really special will happen.

Photo courtesy of Wikimedia Commons.
Posted by Barbara at 8:23 PM