For many years, an evening didn't pass without my enjoying a bowl of Haagen Dazs chocolate, chocolate chocolate chip, or coffee ice cream. I eventually stopped eating it nightly, but I still frequently fantasize about my favorite dessert. And occasionally, I fall off the ice cream wagon and indulge.

Why did I give up my nightly portion of ice cream? As mentioned in an earlier blog (Addicted to My Granola), guilt began to outweigh pleasure when I contemplated the amount of animal fat and sugar I consumed just to satisfy my craving. I started substituting fruit in the evening and found that a juicy orange or a slice of ripe honeydew tasted great and provided just enough sweetness to keep me from feeling deprived. It surprised me how quickly I adjusted to life without ice cream. But I still have challenging moments. 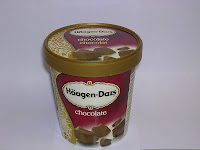 The Haagen Dazs containers in the market's freezer always beckon. Once in a great while, I succumb and buy a pint, thinking I'll limit myself to a spoonful after dinner. No way. With ice cream, I can't just eat one bite. I've never yet bought a pint and been able to resist having at least a half-cup of the stuff every evening until it's gone.

Restaurants also present temptations. Ice cream appears on many dessert menus, often at the end of the list, almost as an afterthought. To me, it's always the most appealing option. Even though it may not be Haagen Dazs, I sometimes give in to the urge and order a scoop or two.

I remember fondly the last time I had an ice cream sundae. A few months ago, E. and I dined with friends at California Pizza Kitchen. I noticed that the menu featured a hot fudge brownie sundae. I asked the waiter if I could possibly get the sundae part without the brownie. He suggested I order the hot fudge sundae from the kids menu—Haagen Dazs vanilla ice cream with hot fudge, whipped cream, mini-M&M's, and a cherry. I dispensed with the M&M's and the cherry and ordered the rest. I wasn't disappointed. The concoction tasted rich, creamy, sweet, and utterly decadent. It was so good, in fact, that I wondered whether I would backslide into my old addiction.

Rather to my surprise, I haven't been tempted to resume eating Haagen Dazs on a nightly basis. But every once in a while, nothing hits the spot like a luscious dish of ice cream.
Posted by Barbara at 5:05 PM