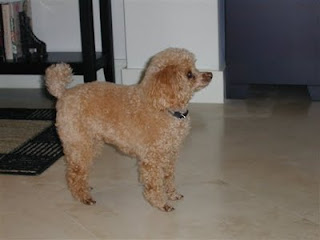 My toy poodle, Cosmo, leads a jet setter's life, at least for a dog. Since Eric and I began to divide our time between Boston and Miami, Cosmo has learned to fly, which for a seven-pound poodle means he's learned how to endure three hours in a tiny carrying case shoved under the airplane seat in front of me. He's become a real trooper, regularly making the trip with barely a bark or whimper. As long as we take him along with us (we're his pack, after all), he's willing to put up with almost anything.

While Cosmo's adjustment has gone well, I've faced a daunting challenge regarding Cosmo's care—finding a good veterinarian in Miami. The task has turned out to be harder than I anticipated. Not that it was easy in Boston, where it took eight years of searching until I met Dr. Robert Denk, the perfect vet for both Cosmo and me—competent, experienced, kindly, and most important, conservative in his approach to treatment.

When Cosmo's mild epileptic seizures required medication, Dr. Denk provided guidance that enabled us to control the seizures while giving him the smallest effective dose. And when Cosmo severely luxated his patella (dog-speak for dislocating his knee), Dr. Denk went against the prevailing wisdom that surgery was necessary and instead suggested we try to let the injury heal on its own. It took a few months until Cosmo was his old self, but his luxated patella fully healed. That was several years ago. Cosmo's now over twelve years old and still walks two-thirds of a mile with me every afternoon.

For a while after we began spending half the year in Miami, I simply crossed my fingers and prayed Cosmo would stay healthy. In a pinch, I knew I could call Dr. Denk for advice. But eventually Cosmo developed an ear infection and I knew I had to find a good local practitioner. After a few initial missteps, I landed at a veterinary practice in Coral Gables. The vet I saw had been recommended by my local groomer (who in turn had been recommended by my Boston groomer). This vet seemed lovely, well-educated, and thorough. Too thorough, it turned out.

According to my new vet, every little complaint required a test (an expensive test, I might add) and every small symptom seemed likely to be a serious disease. The worst moment came when she took Cosmo into the back room so a technician could clean out his infected ear. I've never heard a more heart-rending sound than Cosmo's crying during that cleansing. When Dr. Denk sees Cosmo for an infected ear, he cleans his ear gently, only as much as Cosmo can bear, then has me treat the infection at home with medicated ear drops for a week, after which I bring Cosmo back for a more thorough cleansing. Because the drops have brought the inflammation down, the subsequent cleansing isn't painful for him.

Bottom line, I need to find a vet who's on my wavelength. I love my dog, but I don't intend to allow extraordinary measures to keep him alive. No painful palliative surgeries or nausea-inducing chemotherapies are in his future. And no gratuitous MRIs, CAT scans, or other tests that simply provide too much information. (NB: dogs have to be anesthetized during scans, so they're not insignificant procedures for them.)

Cosmo is an adorable dog, still full of energy and curiosity despite his older age. I want to keep him healthy and happy as long as possible. I'm okay with him being a drug addict (thanks to the phenobarbital I give him for seizures), but I'll never allow him to endure suffering he can't comprehend just so I can keep him alive a little longer. I need a vet who understands this. I know there must be one somewhere in the wilds of South Florida. I only wish I had Cosmo's great sense of smell so I could sniff him or her out.
Posted by Barbara at 9:32 AM