Yesterday's Boston Globe featured an article, "Living in Unity," which described the serendipitous settling of eight Amish families in the town of Unity, Maine. The town had a lot of vacant land and wanted to preserve its rural character. The Amish families sought land for farming. The town's residents value sustainable agriculture and environmentally sound practices, which the Amish lifestyle embodies. So, the townspeople have welcomed the new arrivals. The article's author aptly summed up the Amish philosophy by quoting a sign on the wall of one of the Amish homes—"To be content with little is hard, to be content with much is impossible."

I'm about as far removed from the Amish way of life as imaginable. I live in a big city and I'm dependent on cars, fond of dining in restaurants, and completely lacking a green thumb. Yet those words resonate with me. Over and over, I've learned the lesson that just because I can afford something—a bigger house, a fancier car, a more extravagant vacation—doesn't mean that it will make me happier. That may seem self-evident, yet our contemporary culture embraces the assumption that more is better.

Yesterday, Eric and I drove out to Key Biscayne with friends for a look around. While we didn't find the exact house where Bebe Rebozo used to entertain Richard Nixon, I'm pretty sure we were in the neighborhood—lavishly appointed mansions fronting directly on Biscayne Bay, many behind imposing locked gates. Quite a few had discreet For Sale signs posted, not surprising in the current economy. But the signs were a reminder that even (or perhaps especially) among the supposedly wealthiest of people, there are a large number who live on the edge, maxing out their credit just to acquire as many impressive possessions as possible. 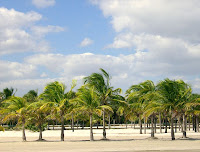 Coconut palms at Crandon Park
Before our drive through the posh neighborhood, Eric and I shared a lovely picnic lunch with our friends at Crandon Park, one of Key Biscayne's beautiful public beaches, followed by a walk through Crandon Park Gardens, which is comprised of over two hundred acres of lush vegetation and small lakes. During our walk we saw peacocks, ibises, herons, and other tropical birds, plus a couple of crocodiles basking in the sun. It was a delightful way to spend an afternoon and a reminder that the best times are often those shared with good friends and family, doing simple things.
Posted by Barbara at 12:11 PM