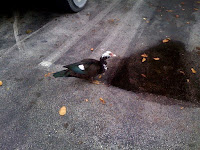 Last winter, I wrote about three Muscovy ducks who lived on the grounds of my apartment building (Duck Duck Duck). By spring, they had been joined by a fourth smaller duck and by the time Eric and I headed north for the summer, they all seemed to be thriving. However, when we returned in late October, I was surprised to find only one duck in residence, the smallest of the group, the one who had joined the others belatedly. He had apparently remained behind when the rest decamped to a new locale.

Every morning, when I walk Cosmo, I see the little duck standing on a hillock of grass near the path. He looks lonely. I plead guilty to anthropomorphism and projection (and also to assuming the duck is male), but there seems little doubt that the unfortunate creature craves company. As we approach, the duck waddles in our direction with a hopeful tilt of his head and an eager glint in his eye. Even when it's clear I have no bread crumbs to offer him, he continues toward us. But Cosmo is not as sympathetic as I. So long as Cosmo is busy sniffing, the duck advances in our direction, but once Cosmo looks up and eyes the invader, frenzied barking ensues and the poor lonely duck backs off.

A few days ago, as I returned from an afternoon walk with Cosmo, I noticed my neighbor standing with her sweet, docile Shih Tzu. Just next to the Shih Tzu was the little duck, looking decidedly happier (I know, projection again, but can you blame me?). I expressed my concern about the duck's solo state to my neighbor. "Ducks are social animals," I said. "They need their group." My neighbor emphatically agreed and then she told me what had happened during the summer, while I was away.

The condo board had decided that the ducks should be relocated. My neighbor wasn't sure why—possibly for their own good, possibly because they were messing up the paths with their droppings. It was meant to be a humane operation. The ducks would be sedated and then moved to a suitable spot, where they would wake up together. Unfortunately, one duck was left behind. Perhaps he wandered under a bush after he became drowsy and couldn't be found. Whatever the reason, when the duck came to, he was alone—one sad duck. 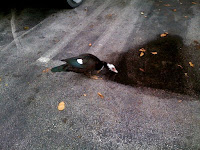 While I can't provide a totally happy ending to this tale, there are some bright spots. A few of the residents have taken it upon themselves to care for the duck, so he's well-fed. The condo association still provides fresh water through a plastic pipe extending from an outdoor water fountain, although the duck seems to prefer sipping from puddles in the parking lot. And the duck has made a few friends among the local pooch population. Unfortunately, Cosmo isn't one of them. But I've taken to greeting the duck in soothing tones, which sometimes produces a little waggle of his tail feathers. He may not be as smart as Cosmo, but I'm convinced the little duck knows I'm his friend.

Note—If you click on the photos, you will see much larger, clearer versions.
Posted by Barbara at 10:04 AM