I was going to try for a little humor today, to lighten things up after yesterday's worried sunscreen screed. But there's nothing funny about Osama bin Laden, nothing humorous about his life or his death. And there's still only sadness when I think about those who died on 9/11, including one among them whom I knew, Richard Ross. 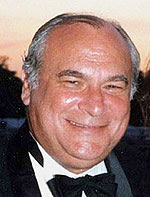 Richard was a genial man, a gentle person with an affectionate style. He had a wife, two daughters, and a son. One of his daughers, Alison, was diagnosed with a brain tumor as a young child. The family was given a dire prognosis, but Richard refused to accept it. He assembled a team of neurologists who ultimately saved Alison's life through a combination of surgery and radiation. She's now a beautiful, healthy young woman.

E. and I met Richard through the YPO, a business organization that sponsors educational and social events. Richard loved the YPO and its related organization, the '49ers, and was a regular attendee at their gatherings along with his wife, Judi Rotenberg. So, it came to pass that I last saw Richard on the evening of September 10th, 2001 at a '49er event held at the Massachusetts Historical Society.

After a fascinating lecture and tour of the building, the group gathered for a cocktail reception. Before we left, E. and I stopped to chat with Richard. He mentioned that he had planned to fly to Los Angeles that morning, but had postponed his trip so he could attend the event with Judi. As we parted, Richard kissed my cheek and said "Goodbye, dear." The next morning, he boarded American Airlines Flight 11, bound for Los Angeles. The plane flew into the North Tower of the World Trade Center at 8:46 a.m.

There's a phrase in Judaism, tikkun olam—repairing the world. Richard worked to create a better world, in his personal life and in the wider society. Bin Laden aimed to tear that world down. Today, I choose to celebrate and emulate the life of Richard and others like him. Let's hope the world chooses to do the same.
Posted by Barbara at 1:07 PM