Last Sightings Before My Northern Migration

Earlier this week, I departed from Miami and returned to Newton, land of New England cottontails, wild turkeys, and red-tailed hawks. Since my arrival, I've spotted a Baltimore oriole, many mourning doves, several robins, and a couple of cardinals, in addition to numerous bunnies and a lone hawk. The turkeys have yet to make an appearance, but their droppings on my driveway make it clear they still live in the neighborhood.

Spring rains have turned my lawn a lush green and my perennials will eventually attract gold scores of goldfinches and butterflies. There's much to enjoy here in the way of wildlife.

Still, I found it hard to part from my aerie overlooking Biscayne Bay. Every walk along the Bay holds the tantalizing possibility of encountering something unexpected. During my last few days in Miami, I spent extra time scanning the clear waters in the hope of seeing a spotted eagle ray or perhaps an unusual crab or some exotic tropical fish. My efforts were rewarded when I spied a small, round stingray I'd never seen before. And for once, I had my iPhone camera handy. 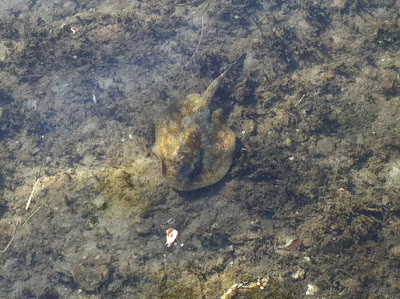 It took some detective work on the Internet before I made a positive identification—a yellow stingray. These rays have periscope eyes, giving them a 360-degree panoramic view of their surroundings. So, I'm pretty sure that while I was watching it, the yellow stingray was watching me back.

A few moments later, I noticed a gorgeous southern stingray cruising just above the seagrass. I've seen southern stingrays before, but never such a beautiful specimen and never when I had a camera on hand. Notice the delicate blue along the edges of the ray's wings and tail. 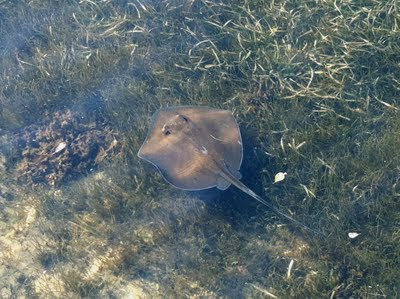 The real surprise of my day came as I ended my walk and crossed the parking lot toward my apartment building—I found one of my two Muscovy ducks happily slurping water from a drainage grate. I hadn't seen either of them for days and had even wondered whether they'd migrated north.

The duck looked up briefly when I greeted it. 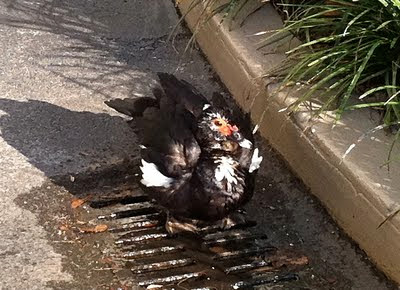 Then it ruffled its feathers and resumed drinking, as the photos below show. 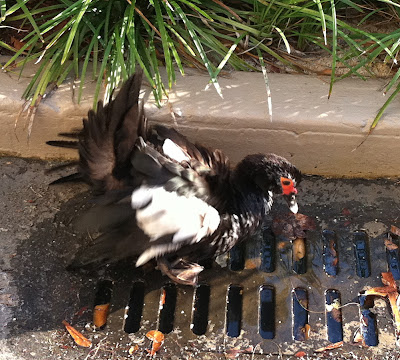 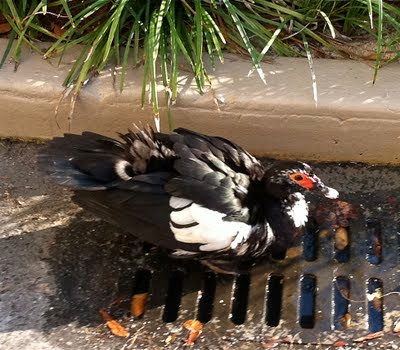 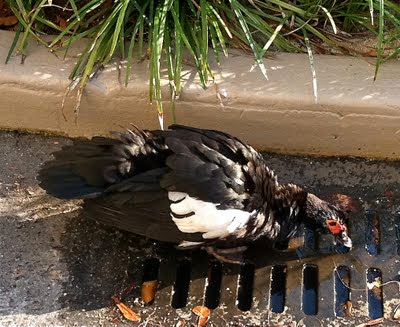 I felt delighted to see my feathered friend and a great sense of closure at its return only two days before my migration north.

Now that I've settled into my Newton abode, I look forward to taking a walk to nearby Chandler Pond. I'm hoping to greet the ducks there, as well as the geese, cormorants, red-winged blackbirds, turtles, and maybe a couple of swans.

Click on the photographs to enlarge them.
Posted by Barbara at 5:26 PM