It happened in the unlikeliest of places, at the unlikeliest of moments. E. and I were driving home from New York after spending the weekend with our kids and grandkids. We decided to stop for gas and a bite to eat in Glastonbury, Connecticut, a pretty town along our route. It was early evening and the light was just starting to fade. As we pulled into the gas station, I glanced out the car's front window.

Above me soared a bird with an impressive wing-span, whose wings themselves appeared black against the blue sky, and whose head looked as white as Bill Clinton's hair. Clinton's hair comes to mind because the day before, while exploring the little village of Pleasantville, NY, we had encountered the former President at a local bookstore, where he was holding forth on politics to a couple of random customers. His hair looked very white.

But I digress. The moment I saw the bird, I knew it was a bald eagle — wild, free, and for some reason searching for prey above a gas station in the commercial district of a manicured suburb. I had last seen a bald eagle twenty years earlier, in Juneau, Alaska, where they are common. But I'd never seen one on the East Coast. 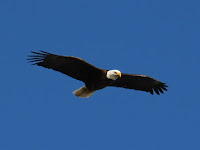 I felt joyful, as if I had achieved something special by my mere proximity to such a magnificent creature. I knew that bald eagles are part scavengers, an attribute not in keeping with their lofty reputation, but at that moment I saw nothing but the bird's noble countenance. The incongruity of the setting made the experience all the more thrilling.

By the time E. had filled the tank, the bird was gone. I checked my Cornell Ornithology Lab's Merlin app to see what else I might learn about the bald eagle and its presence in this quiet part of Connecticut. I discovered that the adult's wings are dark brown, though they had appeared black from my vantage point. Further, bald eagles inhabit areas near lakes, reservoirs, and rivers. The Connecticut River runs through Glastonbury and might explain the bird's presence nearby.

The eagle had departed but the feeling of joy stayed with me for a long while. Worries big and small receded. Everything around me seemed more vivid and beautiful. Sort of like how Bill Clinton looked larger than life in that little bookstore, though I wouldn't go so far as to call him beautiful.

I love birds and I enjoy watching them. Over the years, I've learned to identify quite a few species. However, I don't think of myself as a "bird watcher." I don't keep a life list, nor do I go hiking at ungodly hours in search of new sightings. But like many birders, I'm grateful that I share this world with bald eagles and all the other amazing bird species. With the possible exception of pigeons.