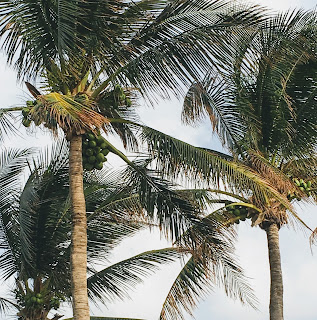 Long before I ever imagined living in a place called Coconut Grove, I heard an unfortunate story about a coconut. It was told to me by Herb, a family friend, and it came to mind recently, as I gazed at the coconut palms still standing on my hurricane-ravaged island.

I was visiting my parents, who lived in Boca Raton. I had arrived a few days earlier from mid-winter Boston after a nasty bout with the flu. Herb, who lived nearby, had come over to say hello. I told him how wonderful Florida's warm, humid air felt and mentioned that I had been especially enjoying evening strolls under the palm trees in my parents' neighborhood.

"Be careful about the coconut palms," said Herb. "A friend of mine was taking a walk and a coconut fell on his head and killed him."

Not a reassuring story for a worrier like me. It had never occurred to me to fret about walking under palm trees. But Herb's cautionary tale stayed with me. His friend's death seemed like a particularly embarrassing way to go — one minute you're living in an earthly paradise, the next you're done in by a coconut. 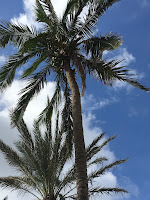 The island where I live has many coconut palms. As I detailed in my last post, virtually all of them survived Hurricane Irma. So did the bunches of coconuts hanging from each tree, and they have continued to grow and ripen during the weeks since the hurricane. Normally, the landscape crew that takes care of the island removes the ripening fruit before it can reach the stage where a gust of wind or its own weight could bring it down, but with so much cleanup needed after the storm, coconut removal apparently hasn't been a priority. Individual coconuts have begun falling to the ground, causing me to worry that even a gentle breeze might send one flying in my direction.

At first, during my daily walks, when I approached a stand of coconut palms overhanging the path, I would lean my head back to see if anything was about to fall on me. Not a brilliant approach, since anything that did fall would then smash me in the face, an even worse fate than being beaned on the top of my head. So, for the past few days, when in the vicinity of hanging coconuts, I've taken to walking with both hands on my head. This detracts from the impression I'd like to give my fellow residents — that I'm a laidback sophisticate from up north — but I'm hoping it will diminish the impact of a fallen fruit on my skull.

A few days ago, attempting nonchalance, I mentioned the coconut situation to a neighbor and was relieved to learn that I wasn't the only one who had noticed the coconuts and worried about them. According to my neighbor, the condo's landscape committee had asked the landscape crew to remove them as soon as possible.

This morning, the crew arrived with two bucket trucks and began working on the palm trees. Inexplicably, they've chosen to start by removing dead fronds from the palm trees that line the road through the community even though those are not coconut palms and pose no threat to walkers. Still, I'm not complaining — only a few more days of walking with my hands on my head and I should be able to relax.