Above and Beyond the Call

If you'd asked me before this week, I would have said that nowadays most people don't take pride in their work. I would have been wrong. Wrong, at least, in the case of Olde England Painting, the company E. and I hired to paint the exterior of our house four years ago.

When we first met Paul Adkins of Olde England, we were favorably impressed. We had interviewed several painters and Paul's bid was quite reasonable. He seemed very knowledgeable about exterior painting in general and also about a particular problem our house presented—the nail heads of the thousands of nails used to hold the clapboards in place had rusted, causing rust to show through the stain applied when the house was built nine years earlier.

Paul proposed to fill each and every nail head with putty, then sand it down, all in preparation for a new coat of stain. His suggestion sounded good to us, so we hired him. We were impressed every step of the way. Paul showed up with his crew exactly when he said he would and he was a hands-on boss, up on the ladder and prepping and painting alongside his men. All of them were pleasant to have around, worked hard, and cleaned up after themselves. They did a great job. So good, in fact, that I offered to act as a reference for Olde England Painting.

From time to time, I would get a call from a potential Olde England customer. I always gave Paul and his guys a rave review and I always felt good about being able to send more business Paul's way. Until about a year ago, that is, when E. and I noticed that the paint was starting to peel where the nail heads had been filled.

We were disappointed, of course, but what could we do? The paint job was only three years old, way too soon to consider repainting the entire exterior, but way too late to expect Paul to come back and fix it. Besides, wouldn't the same thing just happen all over again? We decided we'd have to live with it.

E. and I still spoke highly of Old England when potential customers called, but as the peeling paint became more and more obvious, we began to feel uncomfortable about giving our unqualified recommendation. Yet, we didn't want to say anything that would cause Paul to lose business. Finally, E. called Paul and asked him to take our name off his referral list and mentioned the peeling paint problem. Paul said he'd like to stop by and take a look.

Several weeks passed. I assumed Paul had come over at some point when we weren't home and checked out the situation, but we didn't hear anything further, nor did we really expect to. Then a few days ago, while I sat in my pj's eating breakfast, I saw a man in painter's whites on the deck, staring at the house—Paul. He didn't see me and he left without ringing the bell. I assumed that was that.

Hours later, though, when I opened the front door, I saw that Paul had left a note. In it, he affirmed that all the peeling spots were occurring where he had filled the nail heads. He said it looked as if the filler had gotten baked by the sun. Then, to my surprise, he added, "I will use a different product to fix it." 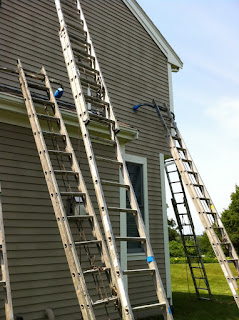 Fix it? Paul was going to fix it? After four years? He had left his cell phone number along with the note, so I gave him a call. Not only was he going to fix it, but he asked me if it would be okay if his crew did the work on Saturday, only two days away. Needless to say, that was fine with me.

On Saturday, Paul and two of his crew, one of whom had been on the original job, arrived even before I sat down to eat breakfast. They brought the same cheerful demeanor and work ethic as I remembered from four years earlier. They used an epoxy filler this time, which hopefully will solve the problem. And they also replaced a trim board because Paul had noticed some rot on it, without our even asking.

Our house looks beautifully refreshed. I plan to ask Paul to put us back on the referral list. And I'll tell anyone who asks what a stand-up guy he turned out to be.
Posted by Barbara at 9:30 AM