C Is for Cockamamie, and for 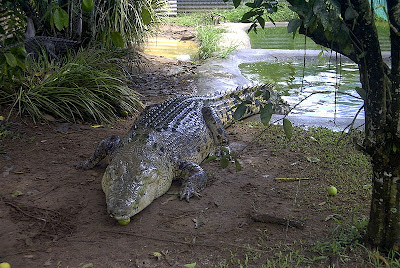 Crocodile
I could never be an actress. That crying thing completely eludes me. No shedding tears for me, crocodile or otherwise. I rarely even cry when I'm genuinely sad. I experience this as a failure on my part. I've been to funerals and worried that others would think me cold and unfeeling.

Cranberry
My son loves my cranberry sauce. Luckily, he likes the simple version that's printed on the back of the Ocean Spray Cranberry bags. Nice and easy, a Thanksgiving staple. I'm not a bad cook, but it takes effort for me. I have friends who find cooking relaxing. For me it's stressful, trying to coordinate everything, trying to please everyone, trying to put on the perfect cooking performance. Exhausting.

Contagion
I've been watching the Showtime series, The Tudors. During the first season, the "sweating sickness" engulfs England. Not the plague, but rather a contagious virus of unknown origin that fells young and old alike and wipes out a huge portion of the population. This really happened. Kind of like the Spanish flu, in our own era. Or what could happen if bird flu ever reached pandemic proportions.

Cough
Hmm, I can't seem to shed the contagion theme.

Chicken
Don't get me started. I love the taste of chicken but can no longer bear to eat it, having learned about the horrors of factory farms. I used to think I could eat chickens that had a real life before their death, so-called pastured chickens. But now I'm not so sure. I'd rather watch chickens strut their stuff. Unless they became bird flu carriers, that is (see above).

Cocktails
I'm very fond of cocktails, not so much of cocktail parties. All that flitting around, making bright conversation about nothing to somebody I may never see again. I used to think I was good at it, until I noticed the toll it took—the fake smile, the feigned interest, the wanting to be the most beautiful girl in the room. Now I'd rather find one person I know and spend a while talking to him or her. Preferably with a martini in hand.

Captive
The way I sometimes feel at cocktail parties (see above). And also why I never go on cruises (what if I want to get off the boat?) and how I feel in a crowded elevator (praying it won't get stuck). As a child, I used to think jail wouldn't be so bad if they would let me read books and live in a private cell. Mind you, it would be a nice cell, no insects, and ice cream would be served for dessert.

Carpool
I miss the days when my kids were captive in my car and I could get them to talk to me. When I picked up their friends, I loved listening to them talking together. If I kept quiet and just drove, sometimes they'd forget I was there and I'd hear what was really on their minds.

Costco
What's with that place? People seem to love it. Otherwise sane friends of mine act passionate about a store. They extol the turkey rolls, the wine, the toilet paper. I went once to see what it was all about. The staff was friendly but I was overwhelmed by all the stuff and the sheer size of the place. I like to buy my tuna one can at a time, and only pole-caught.

Canada
I've always thought I would like living there. Such a calm society compared to violent and volatile America. Canadians act nice to one another, I imagine, and are a neat and tidy people. I once knew a woman who came from Ottawa and she lovingly described skating on the Rideau Canal in winter, how she reveled in the frigid beauty of the city. 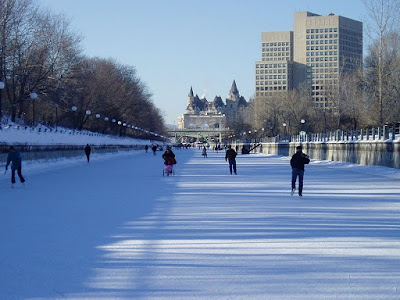 Photographs courtesy of Wikimedia Commons.
Posted by Barbara at 6:48 PM