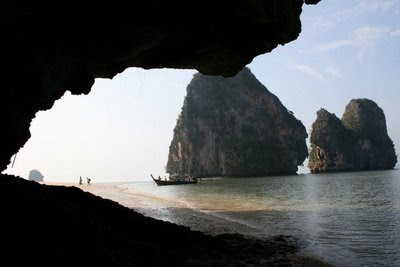 I love traveling—in my imagination. I have a voracious appetite for stories, photographs, and films that illuminate other cultures. My niece recently sent me photos from her trip to Thailand.

The pictures of fruits and flowers, crabs on the beach and coconut ice cream served in a coconut shell present a delightful array of local color. The beaches look stupendously beautiful, the rock formations unlike anything I've ever seen. The Grand Palace in Bangkok glows with an otherworldly beauty. I'm so glad my niece shared the record of her experiences with me, especially since I can enjoy it without the stress of airports and long flights, packing and strange beds, unfamiliar languages and that feeling of being a tourist, an outsider looking in.

To satisfy my thirst for exploring foreign lands from the comfort of my own home, I seek out books that help me enter different worlds. My all-time favorite is Peter Hessler's River Town: Two Years on the Yangtze. Hessler, an American who taught English for two years in Fuling as a member of the Peace Corps, literally asked the same questions I would have asked if I'd been there. He transmitted the flavor of the place as experienced by someone from my own culture, the things that surprised him, captivated him, repelled him. I felt as if I were there, without the hassle, anxiety, and expense.

Novels also have the power to transport me to other cultures, as do films. The movie Monsoon Wedding, set in New Delhi, enveloped me in the sights, sounds, and emotional color of that Indian city. Of course, I got only a brief and narrow glimpse of an enormously varied landscape. Reading or watching a film obviously can't convey the smells and textures of a foreign place. But even when I've actually traveled to other countries, I rarely manage to experience more than a sliver of what lies beneath the facade. And I feel the separation more keenly.

I do sometimes rouse myself from the couch and fly off to foreign locales. Invariably, the most rewarding experiences occur when I know people in the places I'm visiting. In 2007, I spent a few days in Nice, where my French cousin and her husband live. Seeing the city through their eyes gave me a deep sense of connection. During a trip to England, we visited academic friends of my in-laws at their charming house in Cambridge, then spent the afternoon touring Cambridge with them. Exploring Christ College with a former don and his wife made it so much more personal and real. Those trips were worth the jet lag.

Mostly, though, I prefer armchair travel. I'm one of those (apparently) rare people who truly enjoys viewing other people's travel albums. So, next time you're off to exotic ports, have a great trip. And email me your photos when you return!
Click on photos to enlarge them.
Posted by Barbara at 7:56 PM